While many star struck men and boys visited salons to get the perfect 'Ghajini' cut, two lucky fans got their hair buzzed by Bollywood superstar Aamir Khan himself at a market in the capital.

'Quite a lot of people are getting this 'Ghajini' haircut from various places, so I thought I will give the cut to some of my fans myself. I felt very light when I got it done - there was no need to comb my hair after the bath,' said Aamir, who gave hair cut at Bengali Market in central Delhi as part of his promotional activities for 'Ghajini'. 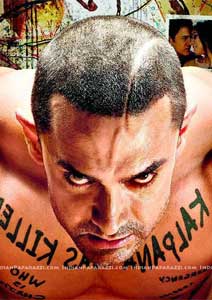 Featured Video
Aamir gave the hair cut to Shamshir, a hairstylist, and Shivek, a grade five student in the presence of a huge crowd.

'I felt very nice when Aamir cut my hair for me. It's like a dream come true for me. I was waiting for him since five in the morning and I will definitely watch 'Ghajini' on the first day,' said Shamshir after his 15 minutes of fame.

While Shamshir was keen to get the nearly bald look, Aamir took special care before snipping Shivek's tresses - he took permission from Shivek's father before cutting his hair.

After doing his bit as a barber, Aamir said that it was a fairly simple job.

Several others were craving to sit on the hot seat, but the actor couldn't oblige all his fans. But he compensated by singing a few songs including 'Guzarish' from 'Ghajini'.

Apart from adults, children were present in huge number at the event. Some of them sat and stood on their parents' shoulders and shouted 'Aamir bhaiya, Aamir bhaiya' until they managed to establish eye contact with the star.

Four-year-old Kavya came with her father just to catch a glimpse of the star, but managed to reach his arms when Aamir said he was keen to give the 'Ghajini' look to a woman. Kavya was the only one sporting enough, but Aamir didn't quite want to spoil the little one's soft hair.

Lots of other kids came with autograph books, but returned dismayed because of multiple barricades and heavy security. Others came equipped with cameras and were busy taking Aamir's pictures and videos.

About 'Ghajini', Aamir said: 'It is an action film yet deals with a lot of human emotions. It is a beautiful love story.'

Aamir has teamed up with south Indian actress Asin and Jiah Khan in the film.