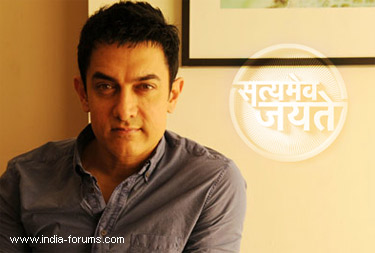 Two weeks after Bollywood actor Aamir Khan touched upon the subject of child sex abuse on his show "Satyamev Jayate", the bill targeting the offenders finally got a nod in parliament.

The actor is delighted that the bill was passed Tuesday.

During the episode telecast May 12, Aamir had spoken to several such victims, their family members and narrated their dreadful experiences of being molested or sodomised.

After the episode was aired on television, Aamir took to internet to thank the guests who appeared on the show for sharing their tales.

"I want to thank the brave survivors who came on the show today to share their stories. Anamika, Cinderella, Harish, Ganesh, Nazneen and Padma Aunty (Harish's Mom), Y'all have done a great service to all of us," Aamir posted.

TheBoyWhoLived 8 years ago I'm loving how this show is making a positive impact on the viewers!...As aamir has said in the promos "dil pe lagni chahiye" and it surely is! Thanks Aamir for taking initiative to bring such issues to the viewers...Only you could have done this!

iramtheegr8 8 years ago Heartiest CONGRATS!!
Inshllah may you show go Big becuase what youn are doing is exceptional and life changing and these actions happening in India re being deal with!!!!!

khushiiXOXO 8 years ago great news!!!hope such cases wil be handled by fast-track courts!!

atominis 8 years ago Superb impact of the show! Even Harish Iyer said how Satyamev Jayate made masses aware of this issue and played a major role in passing of the bill for protection of children against sexual offenses. Salute to Aamir Khan for using his star status in positive direction! And to STAR for utilising their reach so well. It's not just a TV show, it's a movement!

teri_susan 8 years ago Congrats to U Aamir Khan and all those who supported the bill.

skydome 8 years ago Congratulations, on your innovative and power initiative. Our blessings remains with your goodness.

sonu10 8 years ago yo man see the result of ur work hope u continue such work bless u...