The very cute pair of Aamir Ali and Sanjeeda Sheikh was recently felicitated with the Dishiest Couple Award at the DNA After Hours Food Awards. 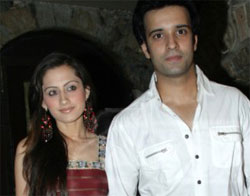 Featured Video
According tour source, "In addition to giving away 20 awards to restaurants across the city, DNA sprang a surprise by giving away some 'dishy' honors to celebrities, in which Aamir and Sanjeeda took home the 'Dishiest Couple Award'".

We called up a delighted Sanjeeda who said, "It was a competition held by DNA where they rewarded celebrities with awards for various categories. While Deepika Padukone won the Dishiest Female Award, Arjun Rampal was given the Dishiest Male Award. Amrita Rao received the Sweet Tooth Award, and we were glad to get the Dishiest Couple Award amidst such big dignitaries".

When asked what exactly this award means, she quips "This is not something like an award given for foodies; it was given to us as they found us to be the most loved and adorable couple having all the ingredients in our relationship (smiles)".

"We received a trophy from DNA, and this has been the best thing that has happened to us", concludes Sanjeeda.

All we can say is that Aamir and Sanjeeda really make a 'yummy' couple and deserve this award fully!!

+ 3
13 years ago they relle r d cutest n hotest couple in d tv industry, both look amazing with each other, sanjeeda is gorgeous n amir is both hot n cute, he is awesome

Vohra41 13 years ago Gud I fink they r da sexiest and sweeetest couple. Yummiest is a right name for them..

13 years ago me like Aamir in Bhaskar Bharti...His expressions are mind blowing, and he looks sexy....

13 years ago truely they are the dashing and sexiest couple!!!

i hope ur love grows and deepens day by day not like the love which is fashion nowadays.

violet-ray 13 years ago I like them together they look so made for each other.