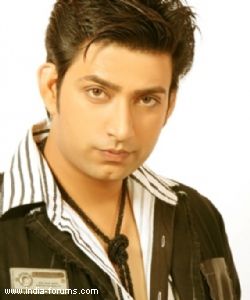 Aadesh Choudhary aka Diggu of Colors' Laagi Tujhse Lagan is having a hard time these days as he has suffered a head injury lately.

A source says, "Recently there was a huge fight sequence that had to be shot when Diggu had been captured by Nana Saheb. Aadesh injured his head during the shoot after which the doctors have asked him to take rest. They have also asked him to do a CT scan as he is suffering from high blood pressure."

When TellyBuzz contacted, Aadesh said, "Yes, I injured my head while shooting a scene. There was a scene where I was tied upside down after which I had to be immersed in water. When we were doing the scene, the person who was holding the rope suddenly lost his balance and the rope slid. I hit my head on a rod. My head was paining very badly because of which the doctor had asked me to take a CT scan and take complete rest as I have high BP."

We hear that Aadesh continues to shoot despite suffering from the injury...

sali195 9 years ago oh dear, poor aadesh he injured himself again on the sets of LCL. It is pretty obvious that not only has LCL lost the plot completely but that the crew also have no safety measures put in place for the actors and crew members HOW SAD!!!!!!!. Please aadesh it is my request to you to quit this show it is not worth the effort that you are putting into it just to please us viewers, which we so obviously are not.

Noor112 9 years ago Get well soon AADI...take rest and take care of yourself...
Wishing you speedy recovery..LUV U&lt;3

shivani003 9 years ago Poor guy! He got injured again? Wow he's suffering high bp at such a young age. Well I hope he recovers soon.

berke 9 years ago I felt sorry for him.
Insaallah soon regains health.

siyona 9 years ago this is dangerous hope he gets well soon..

Keva 9 years ago Get well soon. AC is injuring himself the second time while shooting for a fight sequence in this show. It is obvious that the people associated with this show are doing timepass since they have no story but the least the PH, Director, Colors Channel can do is ensure the safety of the people working for this show. I mean all they have to do is shoot some random scenes everyday since they have no story for this show and hence they can certainly make LTL-2 set more safe.

LOLitaPawar 9 years ago OH!That is so bad.
Hope he is fine soon.

Sneh-Jiwan 11 years ago Its the most pathetic movie I have ever seen after CCTC,Tashan and Aag !! Both Kareena and Akki are playing childish rolls for the adult audience !! Where did this billion comes is the news and the tax people should investigate this badly written, scripped acted and horrible songs movie !!