From retro to remix, from peppy, foot tapping numbers to soulful melodious soft numbers - every genre of songs was served on the melody platter of the two musical shows this weekend. It was definitely a music lovers’ delight! This week was an “A” special week. All the headline creators – whether be it Anvesha, Ashwariya or Abhas of Chhote Ustaad, or Judge Amit Kumar and the eliminated participant of K for Kishore Amanat Ali - all "A's"!!! 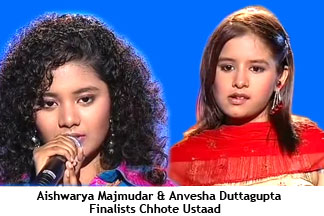 Featured Video
VOI Chhote Ustaad has reached its final stage where now the two best ones - Aishwarya from Gujarat and Anwesha from Kolkata are fighting out for the coveted title – The Chhote Ustaad. Friday they did stage show at Delhi while Saturday it was at Kolkata. Both the days, viewers were treated with some awesome performances by the two contestants who kept outperforming each other. Instead of Delhi probably they should have gone for Ahmedabad as this selection puts a big question mark over the home city support that one of these two contestants will now be getting. How fair is it on the other contestant who will get just one day’s advantage as Ahmedabad has been declared to be covered next Friday? It was unfortunate to hear Abhaas saying repeatedly that the whole nation is now divided into two parts. Both the girls gave some memorable performances, but what stole everyone’s heart was the Bangla song sung by Aishwarya. It is always difficult to sing a song of another language, but this girl from Gujarat not only chose a tough song, she sang it flawlessly too. Shilpa Shetty and Rani Mukherjee as guests brought in lot of fun factor on both the days. 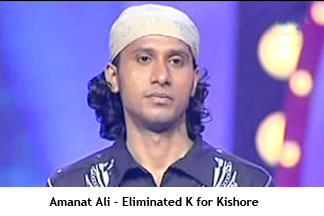 K for Kishore this week had Remix songs of Kishore as the theme. The contestants composed the remixes and gave some really good performances too. That many have reservations for Remix songs was evident on the show as well. Nagesh Kukunoor made it very clear politely that he does not advocate the idea of remixing these Golden Era songs. But where Nagesh put forth his views in the most polite manner, Amit Kumar decided to do just the opposite. He was very vociferous in voicing his displeasure and in the process he ended up belittling remix singers. He even forgot that few of his fellow colleagues in the show also sing Remixes. Such an outburst from an esteemed judge where the decorum of the show is compromised is indeed a very sad state of affair. Amanat Ali from Pakistan got eliminated this week and this elimination was probably long overdue too.

Every show must maintain certain decorum and if that is breached, it becomes the duty of the editing team to take care of it, instead of highlighting it in the promotions. When things are done tastefully, that attracts the viewers more. Drama can catch public attention momentarily, but it cannot sustain the interest level. That is why the correct “expression” is very important in creating the needed “impression”. All the channel houses should realize this. Otherwise we will have situations like what we witnessed in K for Kishore this weekend.

14 years ago Anwesha once again proved that she could win hands down. She is the no. 1 chotte Ustaad. The most deserving little angel to win the title of Star Voice of India. Her renditions of all three goners where out of this world.

+ 3
14 years ago @Chronic: The author did mention that both the participants performed very well and kept outperforming one another. The reason why Ashwariya is mentioned is because she sang a bengali song which is a totally new language to her and did an exceptional job.Any bengali singing a bengali song is natural but a gujrati girl singing a bengali song flawlessly is something that deserves applaud.....

But not to worry , if Anvesha sings a Gujarati song next friday and does full justice to the song, then she will also be specially acknowledged.

Reagrding the best performance of the show - well u may feel those two song to be the best but i personally feel it was Aishwarya's man mohna and Albela Sajan which was the best in this show.

So you see choice differes from person to person

14 years ago You conveniently forgot to mention Anwesha's show-stealing Mahi Ve performance and her awesome, most difficult Bengali rendition of, Shonkoro Damoroo...which was possibly the BEST performance of the entire competition!

+ 3
14 years ago I definitely agree, Barnalidi - as much as I like and respect Amit Kumar, the manner in which he went about his dislike for remixes was over the board... you not only put yourself down but you are putting others down. Nagesh ji went about this much better like you said, he stated it briefly and politely but didnt exaggerate about his dislike too much..

The songs were pretty good, Amanat had really sweet words in the end too..