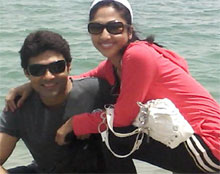 Featured Video
I remember the hotel we stayed in hardly had any other guests. It was quite empty because of the non – peak season. I will admit that it was a bit scary too! But we took advantage of the situation and started cooking up all sorts of weird stories related to it. Poor Mouli became the target of my pranks. I told her there are ghosts in this hotel and that's the reason why not many people come here. She was petrified by the end of the stay. She refused to come out in the corridor also until everyone left together in a group.

In fact Mouli had already heard a ghost story of the same hotel sometime back through our choreographer. She had seen a man enter the lift with her and suddenly he vanished. He didn't get off at any floor but then he was not there in the lift when she reached her floor. So Mouli was already nervous and we just added to it. She didn't sleep the whole night. 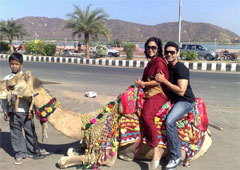 We were supposed to be at the festival till about 12 in the night. But since she had not slept the previous night out of fear she ended up dozing off even before the main event could begin. It was funny because we had actually gone there to witness the festival and she was fast asleep.

The rest of the days we went shopping about a lot. We visited the Villaggio Mall. The mall is designed to look like Venice in terms of architecture. There was a river inside and we went in the boats from one shop to the other. It was a beautiful experience.

We also went to the zoo. There was an Ostrich there  and everyone was feeding it. So even I went with some food to feed it. But every time I tried it would come and bite my shoes instead. It didn't want to eat the food but was after my shoes. Even when Sudhanshu tried giving it some food, it didn't eat. Instead it bit his cap and took it away and almost tore it off. That was hilarious. It was a funny little big bird we got to see! 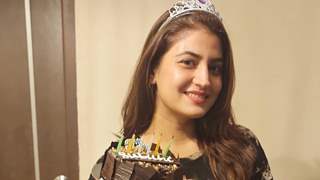 + 7
13 years ago I used to watch the two of them in Kahiin kisi Roz...they also rocked in Niach Baliye...really loveeee them...they're such a cutee couple!!

13 years ago WOW!! Doha i hope they did not miss the pearl and souq waqif and the new islamic art museum !

well nice to hear ppll do comeover to doha for vacations :)

kool they had a nice time!

i am from doha..
thanks.