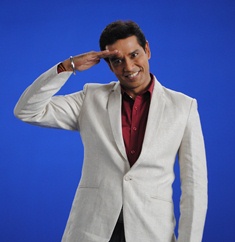 This week, Crime Patrol brings an interesting case of murder full of twists and turns. The two-episode probe will see the mysterious killing of a freelance photographer Hashim Qazi. Post an assignment in Lucknow, Hashim is disturbed but doesn't tell anyone.

Two days later, he is attacked by masked goons who kill him. Unable to catch the assailants, his son catches a faint glimpse of them as they are escaping. The story which began in the year 2000 in Kanpur, Uttar Pradesh, will take a turn when the victim's wife and son are framed for the murder.

Will the police officers be able to find out who the culrpits are? Will Hashim's son and wife be able to prove their innocence? To find out don't forget to watch Crime Patrol, this Friday-Saturday, August 22-23, at 9pm only on Sony Entertainment Television

Real.Madrid 9 years ago Loveyouuu Jay! expected a lot more from this photoshoot though ..

Siddhi_ 9 years ago The cover looks weird :/
It should have been JS alone
but he looks damn good in white!

sweet_angel27 9 years ago Don't find this guy attractive, but he's got a damn good voice!

P.Kamaljit.Sean 9 years ago Love You Sooo Much JS ...You Simply Rock...