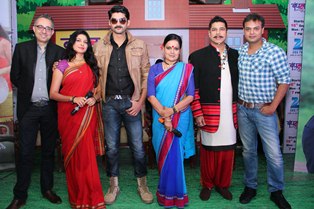 There are some bonds that you are born into ... and there are others that you forge on your own. And then there's a third kind that destiny picks out specially for you, simply because they are meant to complete you as a person!  Relationships of the third kind are sometimes so unique that they question the norms of nature, challenge all socially acceptable patterns of lifestyle and leave everyone around gaping wide-eyed with amazement ... Zee TV's latest prime time offering Bandhan ... Saari Umar Humein Sang Rehna Hai is the first-of-its-kind television show to delve into one such astonishing relationship between a little girl Darpan and Ganesha, a new-born elephant calf that she accepts as her younger brother!

Produced by Swastik Productions, Bandhan ... Saari Umar Humein Sang Rehna Hai is a heartwarming story of two innocent souls and a very tender relationship that develops between the two - one based on the most basic emotion of love and affection for one's sibling,  standing by each other through thick and thin and completing each other. The show will take the viewers through the innocent world of Darpan and her family set in the Dalma jungle. Always longing for a little brother, Darpan's dream comes true in the most unexpected way when destiny introduces her to Ganesha, a baby elephant ... what follows is a journey of love & struggle in the big bad world for the unlikely siblings! The show has been shot extensively in a forest where the Karnik family stays in a picturesque house, a river flowing by its side. It transports viewers to a world in the woods ... distinctly different from the one they inhabit.

The show has the handsome Aditya Redij playing the role of Darpan's father - a kind hearted & upright forest ranger and Shweta Munshi essaying the role of Darpan's mother. The striking Sudesh Berry is back as the epitome of terror, playing the evil poacher Vishwas Rao. Berry's vast repertoire of work includes hard hitting and gritty characters on television and Bollywood. His remarkable portrayal of Loha Singh in Zee TV's popular show Agle Janam Mohe Bitiya Hi Kijo is still etched in the minds of the audience. Says Berry, "My last stint with Zee TV in Agle Janam Mohe Bitiya Hi Kijo earned me rave reviews and I am happy to do another show on the channel The characterization of Vishwas Rao is so gripping & powerful that I could not say no when I heard the narration. The sheer range of emotions of this unpredictable character is truly challenging and I'm thoroughly enjoyed shooting for the same." Popular actors Sushmita Mukherjee and  Aniruddh Dave will also be seen playing interesting parts in the show.

Namit Sharma, Zee TV Programming Head says, "For the first time ever, a television show presents a unique bond between man and animal brought together in the most fascinating manner by destiny and how together, they triumph over the trials & tribulations as a family! It marks a quantum leap for Indian television as the freshness of the concept establishes an all new genre of entertainment for audiences - a far cry from saas-bahu dramas, kitchen politics or anything run-off-the-mill. The show has the potential to draw a much wider audience base than your average soaps as the show's canvas and its heartwarming premise that centers on the universal emotion of sibling love will surely appeal to every member of a family."

Producer Siddharth Kumar Tewary says, "After Agle Janam, it's a pleasure again to work with Zee. As against anything else you see on television today, Bandhan belongs to a world significantly different from the concertized, urban world most of us inhabit. It's been exciting as a challenge to transport the audience into this world of a forest ranger's family that lives in a jungle. We're shooting in real locations with the Karnik home set in an actual forest. We're showcasing the relationship between a young girl and a baby elephant. The task of managing an elephant as a member of the cast is perhaps as big a challenge as the Karniks face as they embark on a journey of embracing Ganesha as a part of their family. It's a difficult show to shoot but a joyride nonetheless!"

The show is being promoted through a 360-degree marketing campaign cutting across print, television and digital media. Given the show's premise of loving animals, Zee TV plans to conduct a school contact programme across key markets wherein the channel will engage children in fun activities that celebrate their love for animals.

CHAVI5050 6 years ago i love u Aditya Redij hi my rocks star waiting for u jaan i love u.

Krilovad 6 years ago plz plz TElly Buzz Why not Showing or Highlite This article TB this is not fair coa u showing other article but not this article why ??