View Profile
The 55th Filmfare Awards were held as per schedule on the 27th of February at the Yash Raj Studios. Playing host were the celebrated Khans, Shahrukh and Saif, complemented by the presence of close mutual friend Karan Johar.

The ceremony witnessed the absence of the prominent Bachchans, in retaliation to the 'false news of Aishwarya's illness' (stomach tuberculosis as reported) published by a Mumbai tabloid which is owned by the same industrial house which organizes the Filmfare awards.

Meanwhile, BollyCurry brings its anxiously awaiting readers, a list of the award winners! 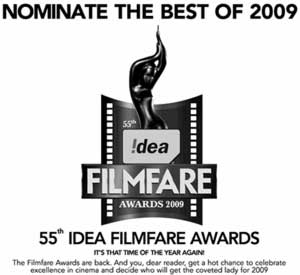 The ceremony will be telecast on national television on 7th March.

Kangana Ranaut Vs Anurag Kashyap: Actress ‘Steps Back’ after ...
18 minutes ago

Disha Salian did not dial 100 before her death, says Mumbai ...
57 minutes ago