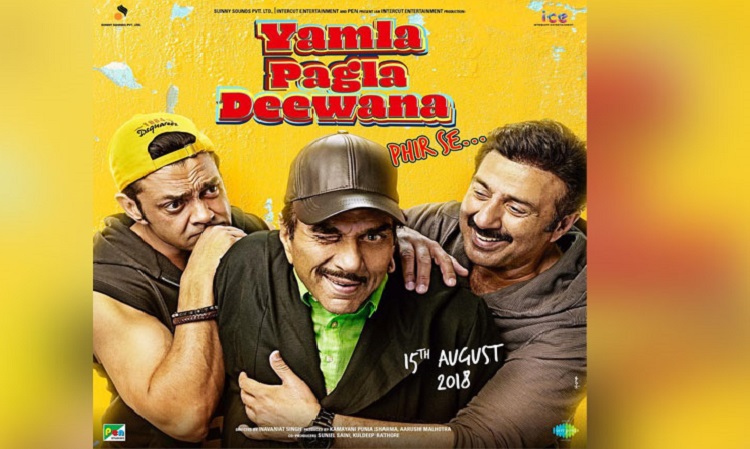 Yamla Pagla Deewana Phir Se starring the trio of Dharmendra, Sunny Deol, and Bobby Deol has finally hit the theatres today! Unlike earlier, the film features Dharmendra Ji as a flamboyant lawyer who fools around with the Deol brothers and eventually ends up reuniting for good. Directed by Navaniat Singh, the film also stars the gorgeous Kirti Kharbanda at her quirkiest.

The film fulfills all the expectations and buzz that the trailer created. Here are 5 reasons to remind you to definitely watch Yamla Pagla Deewana Phir Se in theatres this weekend:

Known for their dynamism and energy, the Deols are back with another dose of laughter and 'paisa wasool entrertainment'. Dharmendra Ji, despite his age, can certainly pull off any scene with a similar swag that he had decades back and his charm is never-ending. Whereas, the Deol brothers are back in their elements and their comic camaraderie will leave you hooked on to your seats.

From Punjab to Gujarat, Yamla Pagla Deewana Phir Se travels a long way creating comic milestones. Amidst the chaos of the plot, the three Punjabi protagonists are expected to bluff to be Gujaratis leading to hilarious punch-lines and series of 'masaledaar' dialogues.

The trailer apart from the amazing Deols promises an ensemble of superstars like Shatrughan and Sonakshi Sinha, Rekha, Salman Khan, Johnny Lever, Asrani and Satish Kaushik amongst others. It also features Kriti Kharbanda alongside Bobby Deol and their on-screen chemistry surely can't be missed.

Yamla Pagla Deewana Phir Se jumps back with a brand new plot and character sketches that once again highlights the Deol's brand of entertainment. The plot brings in a fresh pack of madness and confusion with hysterical moments that are set to leave you laughing throughout the unfolding of the film.

Yamla Pagla Deewana Phir Se recreates the iconic song from 1973 Kahani Kismat Ki that will 'Rafta Rafta' take your heart away! Not to forget, 'Main Little Little Pi Gaya Bhai Little Little Karke' has already become a clubbing number and the song is sure to raise your excitement and mood in the theatres too.