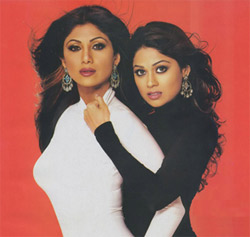 Shilpa Shetty is tying the knot with fiance Raj Kundra in the last week of November and there's a chance that her sister Shamita, who is in the 'Bigg Boss' house, may not be able to attend the ceremony.

'Shamita has not been told anything about Shilpa's engagement or the marriage in the last week of November. As far Shamita knows, the marriage was supposed to happen in December after the show was over,' a source close to the Colors channel producing the show told IANS.

The source said there seems to be no provision to get a contestant out of a game show for a wedding.

Shilpa, who hosted the second season of 'Bigg Boss', has approached the channel to evict her sister in time for the wedding and a meeting between the two parties is on the cards this weekend. But the channel bosses are at a loss as to how the rules can be bent to get Shamita out of the 'Bigg Boss' house.

'There's a provision for a housemate to be brought out in a case of an extreme emergency. It happened with Jade Goody last year. But does a sister's unscheduled wedding qualify as a family crisis? We're now wondering if the same rule as Jade can be applied to Shamita's case,' said the source.

The channel is consulting 'Big Brother' on which 'Bigg Boss' is modelled for the rules.

'After meeting Shilpa this weekend, we'll work out a strategy on Shamita's eviction,' said the source.

According to plans, if rules apply, Shamita's eviction will be done live.

'If an unexpected turn of events helps us boost our TRPs, we're certainly not shy of putting it on camera. We did with Jade Goody. We'll do it with Shamita.'

The pop philosopher of the show Amitabh Bachchan is expected to do the needful. He will be breaking the news of Shilpa's engagement and impending marriage to Shamita.

'The rest is up to Shamita. Once we're sure she can be evicted whether she decides to come out or stay in the House is entirely her decision,' said the source.