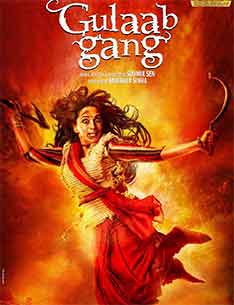 WIFT facilitates exchange of ideas, accelerate professional development and recognise the achievement of women in film, television and other screen-based media.

Inspired by true events, "Gulaab Gang" talks about pink sari-clad women activists who protest against the social injustice in the Bundelkhand region of central India.

WIFT will also send out an emailer to all its WIFT India members requesting to put the first look of the movie "Gulaab Gang" as their status Friday at 12 a.m. The international WIFT will also do the same across 50 chapters globally.

"I thought that allowing WIFT to release the trailer of 'Gulaab Gang' would be apt as a tribute to the women in our industry who toil for cinematic and television perfection, daily here and across the world. The trailer is our token to them, appreciating their work," the film's producer Anubhav Sinha said in a statement.

The film, starring Madhuri Dixit and Juhi Chawla, is directed by Soumik Sen.

"WIFT is so proud to launch the first trailer of 'Gulaab Gang' starring strong women in the lead which is a barometer to the rise in women-centric movies," said Petrina D'Rozario, founder president, WIFT (India).

The film releases March 7, and its trailer will have its theatrical launch when Madhuri's "Dedh Ishqiya" releases Friday.

Sushant Singh Rajput case: NO clean chit given to Bollywood ...
16 minutes ago

Bigg Boss 14: Abhinav Shukla and Rubina Dilaik to be a part ...
52 minutes ago