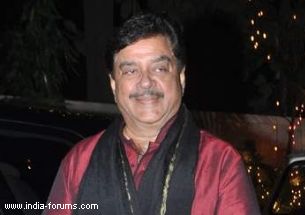 BJP candidate and sitting MP from Bihar's Patna Sahib Shatrughan Sinha says neither does his political campaign require star power, and nor does his actress daughter Sonakshi, who is apolitical, need to campaign for any party.

The veteran actor, often referred to as 'Bihari Babu', recently filed his nomination papers for the Lok Sabha polls. But some people waved black flags against him.

Excerpts from an interview where Shatrughan reacted to the protest, and his political plans:

Q. You were greeted by protestors in your constituency on Patna. How come?

A. These so-called protestors looked to me like hired junior artistes from a Bollywood political drama. They looked suspiciously sponsored by some vested interests. And they seem to have a one-point agenda: To get some space in the media by latching on to my name. Having said that, I must admit that black flag protestors are a sure sign of political clout.

Wasn't Arvind Kejriwal greeted with black flags by protestors? I think if black flag protests don't happen, then the politician is not happening (laughs). On a more serious note, if these so-called protestors have a problem with my candidature, they should talk directly to the party high command. The (BJP) parliamentary board has cleared my candidature. Should I listen to my party or to these handful of protestors?

Q. If I am not mistaken, there were protests against your candidature during the last elections as well?

A. Yes, some people from the All India Naukar-Dai Sangh had protested. I was later told that protest too was sponsored. These protestors are too late in their attempts to oppose me. I've already been declared a candidate by the parliamentary board and none other than (BJP president) Rajnath Singh has proposed my name for the Patna seat. Let the majority decide whether I am worthy of being re-elected.

The poll predictions are that I'd win by an even larger majority than the last time by the support and blessings of the people. I forgive the protestors because all said and done, they are misguided elements from my own extended family.

Q. There were also some questions raised within your party about your daughter Sonakshi Sinha not campaigning for the party?

A. She isn't here campaigning for her own father, then why would she campaign for others? She is busy with her career. And she is apolitical. Let her be. Let me reiterate I don't need any star power in my campaign.

Q. Apparently there was a lot of dispute within the BJP about your candidature?

A. Though Patna was my first and final choice as a constituency, I was told to fight elections from the Delhi constituency because they felt I could influence the voting pattern of all the seats in Delhi. But I said no. Only Patna for me. Once a Bihari Babu, always a Biharu Babu.

Q. Strangely, Bhojpuri actor Kunal Singh has been pitched as the Congress candidate against you in the Patna constituency?

A. Kunal says I'm like his elder brother. He has tremendous respect and regard for me, and I've tremendous affection for him. He must have been coaxed into standing against me by his party high command. During the last elections, they had pitched poor Shekhar Suman against me.

Q. There is talk of dissent between you and your party - the BJP?

A. One thing is for sure. The party has become like an action-oriented drama. The action hero has taken over.

Q. Are you talking about Narendra Modi?

A. My tongue is firmly in my cheek. The leadership seems preoccupied with many things at the moment. Who is the leader is for you to decide. The party is fully charged, poised for the leap. As far as my own dissatisfaction goes, I'd rather look at the glass as half-filled than half-empty.

Q. How is your relations with Narendra Modi?

A. Very good! He is a tried-and-tested leader. He has done so well in Gujarat. We share a great professional rapport, though we may not be that close on a personal level. It's become fashionable to declare oneself a close friend of Narendra Modiji or Rahul Gandhi. But sorry, I am neither Modiji's right or left hand. I am who I am without attaching myself to anyone.

But that doesn't mean I'd question his place in the party when it (Modi's place in the BJP) has been verified by the parliamentary board and no less than Rajnath Singh.

Q. Are you supporting Narendra Modiji's candidature for prime ministership?

A. This isn't the right time to answer this. However, I must say that L.K. Advani is a friend, philosopher, guide and guru to me. He is a godfather to the entire party. I am sure the action hero, Narendra Modi has Advani's blessings.