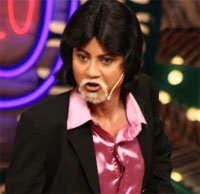 For the first time ever on Indian television, a woman tried to imitate Amitabh Bachchan for an act.

The hilarious act is based on an off-screen conversation between the two which took a dig at every one from Amar Singh to Rekha. Needless to say, the tall actress ensured she got the perfect look with a wig and a suit and even changed her voice aptly to suit the part. The act was appreciated tremendously by the judges Shekhar Suman and Ajay Jadeja as well as the studio audience. In spite of their brilliant performance and Nigar's brave attempt, Nigar and Raja missed on being the 'jodi of the day' to Roshni Chopra and Kuldeep.

Catch this ulta-pulta theme of Comedy Circus 20-20 this Saturday, April 18, 2009 at 9.30 pm only on Sony Entertainment Television.