Last Thursday was a dream come true for Mallika Sherawat! 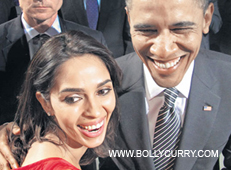 started working on her forthcoming film Politics of Love, Barack.

So just imagine her excitement when she received an invitation to do just that!!

Apparently the actress was invited for tea with Barack Obama during his campaign stop in Los Angeles.

According to sources, Mallika was over-the-moon at the reality of this wishful encounter. The duo chit-chatted about her stay in LA so far and of course, about her upcoming movie which is a rom-com based on the 2008 US presidential elections. Obama reportedly told Mallika to ensure that he gets an invitation to the premiere!

My oh my, we say, Mallika-E-News is sure going the places, meeting the people, making the news! Cinema isn't always about acting now, is it? Bring on the propaganda lady!