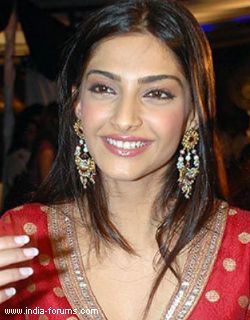 New Delhi, Oct 14 Sonam Kapoor has found a unique way to spread awareness about breast cancer. The actress, known for her fashion sense, has urged companies to encourage their employees to wear pink at work as a mark of support for the fight against the disease.

The special initiative -- Wear Pink to Work Day, for the ongoing Breast Cancer Awareness Month -- has been planned by the Ogaan Cancer Foundation (OCF) and the ELLE Breast Cancer Campaign, said a press statement Friday. It will kick off Oct 21.

The underlying concept behind the programme is to convince people to take a step forward in spreading awareness about the disease, for which early detection is the best prevention possible.

Sonam, the brand ambassador for the Ogaan Cancer Foundation, is happy to do her bit.

'It is my privilege to be associated to play a part in spreading breast cancer awareness. Everyone seems to know someone with breast cancer - I lost an aunt to it. Detecting cancer early is the only way to fight and that requires awareness about tests and a healthy lifestyle,' she said.

'I hope I can make a difference in my own way,' she added.

'With the Wear Pink to Work Day programme, we hope to reach a new target audience for our message, and raise awareness among men as well. After all, we know women are often self-sacrificing, putting their own needs last. And this is true when it comes to health decisions too. ]It's time for us to acknowledge that a woman's health should be a family priority t0o,' said Archana Pillai, OCF director.