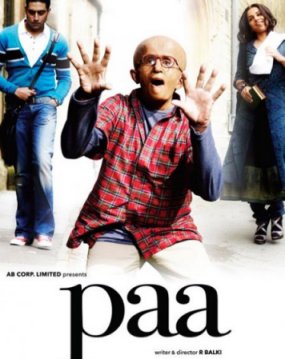 Bollywood megastar Amitabh Bachchan never ceases to surprise. The 67-year-old does it again by playing a 13-year-old in R. Balakrishnan's 'Paa', which releases Friday.

Produced by AB Corp and distributed by Big Pictures, the movie is tagged as 'a very rare father-son son-father story', where Amitabh plays Auro, a 13-year-old suffering from progeria, a rare condition that causes premature ageing among children.

While his real life actor son Abhishek plays his father in the film, Vidya Balan essays the role of his mother in the emotional drama.

'A lot of my interpretation (for the role) has been picked up from what I remember of Abhishek when he was of that age and from my grandchildren now as I see them grow,' Amitabh had told IANS.

To look like a progeria-affected child, the veteran actor had to wear over eight pieces of specially crafted clay on his face, designed by international make-up artist Stephan Dupuis, but says he was pampered during the entire process.

'I was quite pampered on the sets. Actually they (unit members) were more worried about the make-up as it was very tedious. I used to have a lot of problem in breathing, eating and used to feel itchy - but everyone was extremely courteous,' the Big B said.

'I couldn't eat properly, couldn't speak and liquid supplies were given to me using straws. Everyone was quite nice to me and pampered me,' he added.

The film shows Auro as a normal kid mentally, but physically he looks five times older. Despite his condition, he is a very happy boy. He lives with his parents - Vidya, who is a gynaecologist, and Amol Arte (Abhishek), a young, progressive and idealistic politician. Paresh Rawal plays his grandfather in the movie.

'It was a humbling experience to work with Bachchan-ji. This is a very special movie for me...After this role, I can proudly tell my children and grandchildren that Big B was my first child. Not even in my wildest dreams had I thought of playing mother to the living legend of the industry,' Vidya had said.

'Paa' also marks Abhishek's debut as a producer for which he has won brownie points from his dad.

'I think he (Abhishek) has done a remarkable job. I give huge credit to him for making the film without compromising on the quality or the shooting locations...Abhishek has managed all the production hassles and I am glad he has done it with a high level of maturity,' said Amitabh.

'We had set out to make the film within an estimated budget of Rs.15 crore and Abhishek managed it in Rs.14.75 crore. This, in times when movie budgets are soaring to Rs.50 crore,' he added.

Amitabh is being lauded by film critics and industry members for his portrayal of Auro. Many have called it 'awesome', 'amazing' and his 'best performance till date'. But the actor is waiting for the reaction of audiences.

'I'd rather wait for public opinion,' he said humbly.