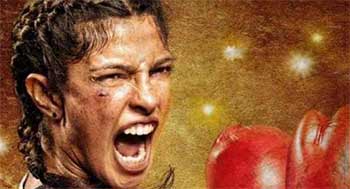 For a crucial sequence in the forthcoming biopic "Mary Kom", based on the life of Olympic bronze medallist boxer M.C. Mary Kom, Priyanka Chopra went for a bald look. The actress says it was her "responsibility" to do justice to her character.

Priyanka's bold look can be seen even in the film's promos.

The versatile actress says she was very excited about it - so much so that she was all around the film's set in that look.

"Mary has done it (gone bald) in her life. This is an authentic scene in the film and I was very excited about it," Priyanka said here Wednesday at the launch of the film's trailer.

"First of all I am an actor, so as an actor it is my responsibilty that whatever character I take up I do it with honesty. This is always my personal challenge that I set for myself that how differently I can portray all my characters. So I was not at all hesitant, in fact I was very excited," she added.

Will she ever go bald in real life?

"Never say never. I always surpise myself, so you never know," the 32-year-old said.