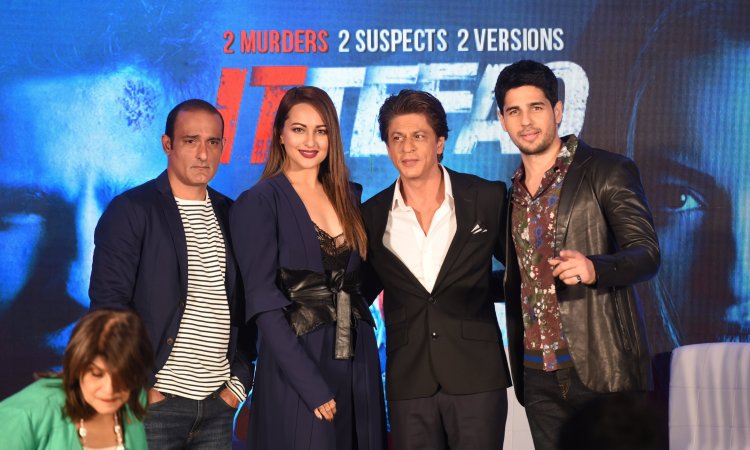 Bollywood superstar Shah Rukh Khan says he had a desire to be a part of the upcoming "Ittefaq" but could not due to his busy schedule. However, he feels happy to be a part of it as a producer.

At a press conference of the film on Monday, Shah Rukh told media: "I wanted to be a part of 'Ittefaq' as an actor, but I couldn't manage time. I was shooting for 'Raees' and 'Fan' at that point of time, so physically it was exhausting. But I am very happy that the way (director) Abhay Chopra adapted the script, changed a bit to make it relevant in today's time... he has done a great job, I hope Insh' Allah people will love the film, once it released."

Shah Rukh's role was later offered to Akshaye Khanna who did it.

Shah Rukh, who was in conversation with co-producer Karan Johar, expressed his excitement of collaborating with him all over again as after some iconic films like "Kuch Kuch Hota Hai", "Kabhi Khushi Kabhi Ghum", "My Name Is Khan", and "Kabhi Alvida Naa Kehna" among others, they have not worked together for a long time.

Annoyed by the speculation if they have any problem in their relationship, Shah Rukh said: "There is some relationship in our life that does not need explanation and mention of how much I love Karan and how we are bonded. Every time if he is doing a film without me, such questions arise.

"As the actor-director duo, if we are doing a film, we should be happy to do it, we should feel excited about the story otherwise, we can say no to each other, without fearing anything about our relationship."

"For one and for all I want to say it on record, I never ever had any problem with Karan Johar and I love him unconditionally. We are a family and we will grow old together and may be at the age of 105, on our wheelchair, we will promote the film in one of such platform, maybe we won't be able to work together but the love, the brotherhood will always be there. If any day, Karan is in any trouble, I will be the first person to stand by him," he added.

3 years ago Very sweet comments on his friendship with KJ. Lucky Karan Johar !