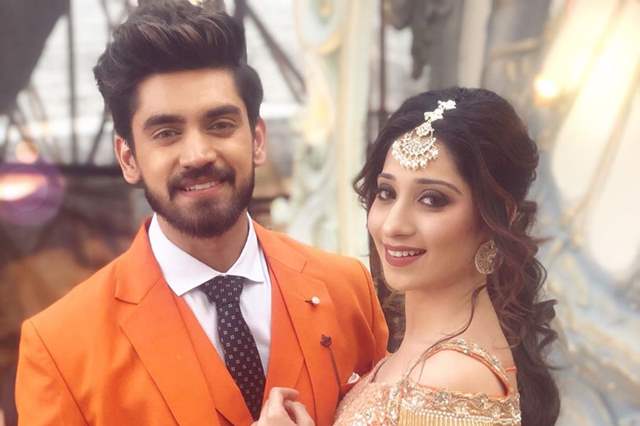 Avinash and Vrushika, you are one of the cutest jodis of Television and will be seen in a new avtaar. Can you tell us about that?

Vrushika- It's a cute love story with a twist.

Being the last day of your show Yeh Teri Galiyan, You have given your fans a special gift, so how are the reviews?

Vrushika- Wherever we go, people know us as Shaan and Puchki, it's been over one and a half year, we have completed 411 episodes, it was a long journey with a lot of ups and downs but the thing that mattered to us was that we had a team team throughout. We had actually shot this video on 26th Jan and planned that we will release it on 14th Feb and co-incidentally our show is going off air on the same date.

Was the casting of the video pre-planned?

Avinash- Actually the song was earlier created by the band Tazveer so I thought that let’s re-create and I will put some story in it. When we prepared the story I thought that we both should only act in that.

This time you have worked in front of the camera as well as behind. Which one was tougher?

Tell us something about the music video

Vrushika- So the song’s name is Nazar Mila. There is a musician in the video, like everyone has their own journey with their ups and downs. If we are just in our own world and depressed about it, nothing is going to work but if we take something from someone's else’s journey and get a little inspired that’s what the video is about.

Vrushika you have been known to create a rocking chemistry with your co-stars be it with Shantanu or with Avinash. So how do you manage that?

Vrushika- It is all Palki Ma’am magic. I got to learn so much from Shantanu. With Avinash, the experience is amazing because we both are like Tom and Jerry. We fight a lot and then we are again together, then we fight and get back again. With Shantanu, dance is the main thing between us.

Rumours are that both of you are dating, is it true?

Vrushika- You know that this happens in every show that yes, they both are dating. So it’s a good thing that our chemistry is so good that they find it real.

Avinash Mishra Joins In; Deletes 'Tiktok' In a Move To Boycott All ...