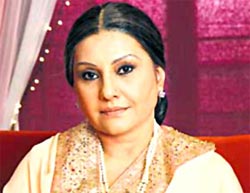 We had reported earlier that prominent writers Shashi and Sumit Mittal will be producing a show for Star Plus, tentatively titled Sajan Ghar Jaana Hai.

The buzz is that the very talented veteran actor Vidya Sinha who was seen in Kkavyanjali, Zaara and Bhabhi is back to television with this show.

According to our source, "Vidya Sinha plays the role of Maai who is the servant of the house. She is respected by all family members as she has seen everyone growing in front of her eyes. Being a servant, she has never crossed her limits but all in the family treat her as a family member".

The show will have many new faces, and as reported earlier, the male lead's role will be played by Kunal Bhatia. Abigael of Kya Dill Mein Hai fame will also be part of the show..

We tried calling Vidya Sinha, but could not get a revert.

+ 2
13 years ago @ Yaashi, yes she was same Vidya Sinha of Rajnigandha movie.