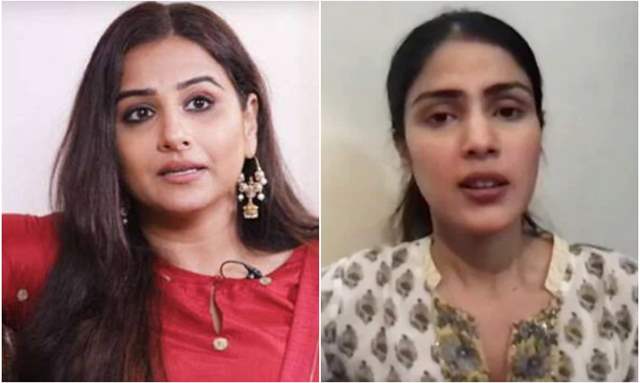 After Swara Bhasker, Lakshmi Manchu and Taapsee Pannu, actress Vidya Balan has come out in support of Rhea Chakraborty. Vidya slammed the vilification of Rhea in Sushant Singh Rajput’s case and stated how the late actor’s death is turned into a ‘media circus’.

"God bless you @LakshmiManchu for saying this out loud. It is so unfortunate that the tragic and untimely death of a beloved young star Sushant Singh, Rajput has become a media circus. In the same breath, as a woman, my heart breaks at the vilification of Rhea Chakraborty. Isn’t it supposed to be ‘Innocent Until Proven Guilty’, or is it now ‘Guilty Until Proven Innocent’!? Let’s show some respect for the constitutional rights of a citizen and let the law take its course.”

However, Vidya’s tweet has not gone down well with netizens who have slammed the actress for standing up for Rhea and allegedly keeping mum over Sushant’s unfortunate demise. Netizens trolled the Shakuntala Devi actress and called her a ‘hypocrite’.

“Vidya Balan saying ‘my heart is melting for victimization of Rhea’, Let ask you 1 thing @vidya_balan where were you,When SSR fans and family are crying for SSR. your heart was stone at That time?? U haven't said a word for SSR, he was also the part your Industry! Hypocrite Lady” wrote an user, whereas another tweeted: “@vidya_balan

"You didn’t say it out loud when things were said about Sushant’s 75 year old father by Rhea and her lawyer. You didn’t utter a word when Sushant’s sister was maligned saying she molested Rhea. Rhea’s every word in her interview was a lie, we have enough proofs.”

Check some tweets by the netizens here:

Meanwhile, Shibani Dandekar has also put a long note in support of her Rhea Chakraborty and slammed the vilification of Rhea and her family. She also demanded justice for them in her post. "What was her crime? She loved a boy, looked after him through his darkest days, put her life on hold to be there for him and when he took his own life she was crucified. What have we become?" she wrote in her post.

Also Read: Shibani Dandekar Supports Rhea Chakraborty & Her Family in a Long Note, asks ‘What was her Crime?’

ChickenSoup 1 months ago One good thing that has come out of all this is now the public will never look at these stars the same way. Their true colours have been exposed and now the public has woken up to reality.

mayad 1 months ago Supporting colleagues is excellent assuming it is not selective! Innocent until proven guilt is what the law requires except when it is selective! May I ask all these "supportive actors" where was their support for a colleague, SSR, when he was accused of being a Me Too violator? Was he not innocent until proven guilty? Or is it because he was a man and Me Too accusers are automatically GUILTY? Double standards no? This is why we, women, are labeled as wanting it "both ways" & why we have too fight so hard for justice! True the Media has stepped in where the police should be, but help me to understand if the Media had not stepped into this case where would this matter be? So let's call a spade a spade, yes this is a circus created by the corrupt police, politicians and media who were part of a smear campaign started within the Bollywood circle. A man is dead. He is the victim! An accuser does not give interviews! An accuser has a lawyer who generally advises their client to say "no comment" least they incriminate themselves. So what is all this?

Tippy-top 1 months ago Ishkaran is saying efforts are being made to silence the voices for Justice for SSR. Please first find the murderers.

Nature-Happiness 1 months ago All this while, she was under the radar. Why are people suddenly coming out of their nutshell to raise voice for a supposed 'innocent criminal'? Just to let y'all unaware people know, she is under the constant radar of CBI. By pushing the innocent bar over her head, and trying to prove her innocence, you celebrities are getting into trouble. If you really want to support, better raise your voice, so that Sushant sir gets justice. And don't fall into that stupid trap of supporting wrong women. Can't believe Vidya Balan can release such an uneducated statement being educated. Rhea is not innocent, if she would be, she wouldn't be giving her statements constantly, and she wouldn't have to put that innocent face mask by running away. If she really was innocent, she would be with the family to provide them with the help that they need. She would ask for CBI to investigate. But, she didn't. And, why is that so?