Pune, Dec 31 (IANS) Bollywood star Rani Mukherjee, who was allegedly duped into buying farmland near the temple town of Shirdi in Maharashtra, will finally get to know whether she gets to own the land or not when a court gives its verdict Thursday.

The actress, who wanted to build a house on the land in Shirdi, where the revered shrine of Sai Baba is located, had purchased 11,000 sq ft land in 2005 from one Sampat More. But Rani was unaware that it was non-transferable farmland and hence could not be sold.

Though the actress paid Rs.132,000 for registration of the land, she was told that the ownership could not be transferred in her name as it was government land leased out to a farmer.

The actress is in trouble as the land, labelled as tenure land, can be bought only with the permission of a competent authority of the district, which she had overlooked.

Chaudhary told IANS over phone, 'Our argument was that as per the law once the land is converted for non-agricultural purposes, provisions of penalty are not applicable and also do not come under the ambit of Ceilings Act.'

The Sub-divisional Magistrate (SDM) of Ahmed Nagar, Nandakumar Suryavanshi told IANS, 'They have tabled their points, we will study and give the decision on Jan 3.' 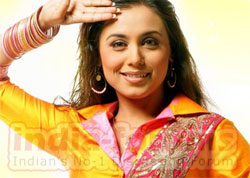 The SDM office is still waiting for the arguments of Sampat More, the agent who sold the land to the actress. According to Suryavanshi, More is expected to table them by Jan 3 - the day a decision will be announced by an open court.

According to the Section 29 of the Land Ceiling Act, Mukherjee will have to pay 75 percent of the market value of the land to the government, which comes to Rs.2.1 million.

The original owner of the land was a farmer who with the permission of the government had started a brick kiln in 1981. However, property prices of the area appreciated tremendously since then, so the original owner started to sell the land in bits and pieces.

More was also one of the buyers but he did not have his name registered in the documents and sold the land to the actress, who purchased it without verifying the document.

The district authorities have chosen not to transfer the land in the actresses' name till the enquiry is completed.