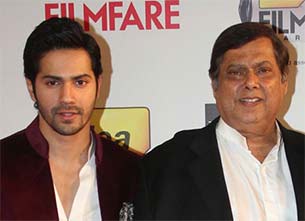 In a career spanning over two decades, director David Dhawan has worked with many an actor -- but his son Varun, who is playing the male lead in his forthcoming film "Main Tera Hero", is perhaps the youngest actor he has directed so far.

"In Davidji's 25-year-old career, his son Varun will be the youngest actor he has ever directed," said a source.

"Main Tera Hero", which also features Ileana D'Cruz and Nargis Fakhri, is the father-son duo's first movie and, according to a source from the production team, 53-year-old David strictly maintained a director-actor relationship with 26-year-old Varun.

"Despite him being the director's son, Davidji was very strict with Varun on the sets. In fact, he was stricter with Varun than he was with Ileana and Nargis! On the set, it looked like a typical Director-Actor relationship!" a source said in a statement.