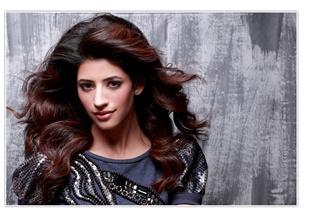 Bollywood actors are known to prepare for their characters extensively but even our television stars leave no stone unturned when it comes to preparing for their roles and getting into skin of their character. Such was the case with actor Shrini Singh, who plays Pakhi in Zee TV's popular show Ek Mutthi Aasmaan.

In an interesting upcoming track, her character  turns into an violent obsessive lover and attempts to win the affections of her love Raghav Singhania (Ashish Chowdhry). To understand the nuances of this complex character, Shirina took references from the actress Urmila Mantodkar, who has nailed the personality of an obsessive lover in her critically acclaimed movie-Pyaar Tune Kya Kiya. Viewers will be surprised to see Pakhi in this all-new avatar with shades of grey; Till now, she has been shown as an extremely sweet, positive girl who despite coming from a rich family, is very down to earth and loving person... but clearly, her emotions for Raghav and their non-reciprocation have brought out the worst in her.

In the show, Raghav marries Pakhi as a form of revenge for all the bad things her family had done to his parents. Despite marrying Pakhi, Raghav continues to love Kalpana (Rachna Parulkar) and this brings out the worst streak of jealousy in Pakhi. Her unrequited love for Raghav soon turns her into an obsessive, violent lover who does things to harm herself and Kalpana. A betrayed Pakhi, unable to get Kalpana out of Raghav's mind & heart, decides to force Raghav to accept her by hook or by crook- even if it means hurting Kalpana & herself!

Pakhi's character will have streaks of Urmila Mantodkar from Pyaar Tune Kya kiya who could go to any lengths to get the person she was madly in love with!  Sharing her excitement on the new change in her character Shirina says "When I was told  that my character Pakhi will turn into a psychotic lover, the first name which hit my mind was that of Urmila Mantodkar's convincing  portrayal of Ria Jaiswal in Pyaar Tune Kya Kiya. Playing an obsessive lover is not that easy, I had to understand the complexities of the character as to what a person goes through when his love in not reciprocated in the positive manner so that I don't end up overdoing the part. I tried to take a few cues from Urmila's character to understand the role better but at the same time I added my own bit and the feedback from the creative team of the show has been positive so far. It was quite challenging for me as an actor and I am satisfied that I have put in my best efforts. I am eagerly awaiting the audience's reaction, hope they like it."

Will Pakhiâ€™s obsession for Raghav destroy everyoneâ€™s life? Who will stop her?

6 years ago Ragna aka ashna 4ever better u pack ur bag..

6 years ago I would love for you to succeed in all your acting ventures. You're new and I hope you improve overtime. Don't let the negativity bring you down. It's sad to see the actor can be bashed so much over dislike of character. Keep doing what you do and love!

6 years ago Rachana Parulkar and Ashish Chowdhry rock as ragna.

6 years ago Rachana Parulkar and Ashish Chowdhry Rock and are the heart and soul of EMA!

6 years ago Rachana Parulkar aka Kalpi and Ashish Chowdhry aka Raghav are awesome actors of ema! I love ragna

6 years ago Rachana Parulkar and Ashish Chowdhry rock as ragna. They sud ve emphasized on ragna rather thn the stupid vamp thing. The show is a doom. Only thing rockin is ragna. Its Ragna 4eva .

nippon1 6 years ago I only watch EMA for RAGH-NA as a pure soul mate, adore them Sooo much. Now I disagree with DJ'S Crvs story forms. To me it could be a superb story line if they emphasis on RAGHNA's characters and show How they achieve together EMA as a married couple. Anyway wish you Good luck SHIRINA.

6 years ago Shrini Singh, you are doing a great job...I hope you fine something better soon to be the lead. You are beautiful and a great actress. But I do not like your character in the show. Good luck!!

Raghav and Kalpana are rocking!