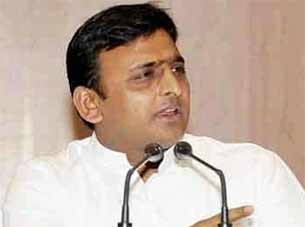 Uttar Pradesh chief minister Akhilesh Yadav was Monday petitioned against the soon-to-be released Bollywood film "Goliyon Ki Raasleela Ram Leela". In her representation made to Yadav, social activist Urvashi Sharma has urged him to "intervene in the matter related to public exhibition of the film".

"I have urged the chief minister to intervene on behalf of the people of the state and request the producers of the film to delete 'Ram-Leela' from the title of the film and change it to only 'Goliyon Ki Raasleela'," Sharma told IANS.

"And also urge the National Board of Film Ceritification not grant certificate for public exhibition of the film under Sections 4, 5 and 5-A of the Cinematograph Act, 1952, in case producer and director of the film do not delete words 'Ram-Leela' from the title of the film.

"This matter is related to the sentiments of lakhs of people of the state and the word 'Ram-Leela' is contrary to the content of the film as shown in the promotional advertisement," added Sharma.

The petition to the chief minister states that the film "was affecting the sentiments of the public on account of its wrongful title for the reason that the title has been derived from dramatic enactment of the life of Lord Rama, which cannot be used by the kind of film."

Sharma said: "I have watched one of the promos of the film on YouTube and while watching the clip, many objectionable dialogues and scenes were noticed by me which, according to me as a social activist, are not only vulgar, rude, offensive and crude but degrade the religious feeling of the Hindus."

The social activist earlier petitioned both the censor board and the Prime Minister's Office to intervene in this matter.