View Profile
Being the most moody star ever, it now seems as if he's also transforming to one of those rare celebs in cinema, who don't work... just for money! Turns out, that the leading star of last year's highest grosser Dabbang, Salman Khan, is now all set to bring to life his latest character - that of a Bodyguard!
Known for his not-so-greedy attitude, it has currently become 'the-talk-of-the-town' that Mr. Salman Khan has turned down the offer of a whooping 7 cro 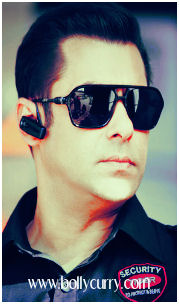 res, to endorse a particular company's brands! No, no...its no kind of rivalry or animosity that brought on his denial. Rather, to Sallu miyan the amount felt a little too unreal and obscene for a mere endorsement, when it exceeds the signing amounts of entire films for most stars. Yes, you're getting it right - Salman Khan has indeed turned the offer down purely on basis of intuitive impropriety of getting so much money!  And was it only days ago that he turned down the prestigious Koffee couch because a lofty cash amount was refused in donation to his charity?! Paradoxial should be Dabaang Khan's middle name!

Anyways, so the conception of all this hot gossip is Salman's decision to don the same uniform that his personal bodyguard, Shera, uses while protecting Khan. Not in a fashion statement, nope, he'd sooner rip off the clothes than wear them to look trendy, as we all well know. This particular avatar comes on for his character of a security cop officer a.k.a Bodyguard, in his next film!
Obviously, many agencies were looking forward to this opportunity to grab the star to endorse their security outfit/agency brand names, and it was one such endorsement offer that could have landed him as much as 7crores; but apparently, Sallu has his loyalties set. As an ode to his personal bodyguard of a decade's standing, Salman insists on wearing that very same uniform.
For the uninitiated, Bodyguard, a film produced by Sallu's brother-in-law Atul Agnihotri, co-starring Kareena Kapoor, is a remake of a Malayalam film with the same name and is also being remade in Tamil.
Now just for kicks, everyone who wants Salman Khan to be their personal bodyguard - say aye!