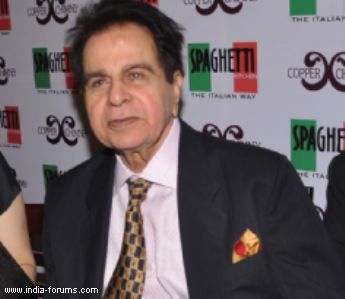 Uday Tara Nayar has written Dilip Kumar's biography, set to be launched on the legendary actor's 90th birthday in December. The author says the two-part book focuses on the actor's nine-decade long journey, his love story with Saira Banu, some untold stories as well as rare pictures of the thespian and his family members.

"The book has two parts. The first part is about Dilip saab where he has spoken about his career. And the second part is where various people have talked about him. People like Yash Chopra and Subhash Ghai, who have worked with him, have spoken about him," Nayar told IANS.

Dilip Kumar teamed up with Chopra in "Mashaal" and with Ghai in "Saudagar".

"Yes, you all will also see rare pictures of Dilip saab and his family members in the biography. Earlier, many books on him came in the market, but this is the first authentic book where Dilip saab has told his story in his own words from the day he was born in Peshawar (now in Pakistan) till now," said Nayar.

"There are a lot of untold stories that one will get to read in this biography. Of course, you will also read about his love story with Saira Banu. It has been the longest lasting love story," she added.

The biography by Nayar, which is yet untitled, will be launched on Dilip Kumar's 90th birthday on Dec 11, 2012.

Dilip saab's wife, actress Saira Banu, is deciding on a title for the biography, she said.

"2013 marks the 100 years on Indian cinema and this book will be a tribute. Dilip saab has completed sixty-eight years in the industry...," she added.

He was crowned the Tragedy King of Bollywood for playing doomed lover in films like "Andaaz", "Baabul", "Mela", "Deedar", and "Jogan".

While many were keen to pen Dilip Kumar's biography, Nayar says she was the fortunate one to get the chance.

"I consider myself fortunate that Saira Banu and Dilip saab chose me to write the biography. We didn't start writing it yesterday or day before yesterday, I have been writing this for three years. Right now the production work is going on," said the author.

The book will be published jointly by Saira's entertainment enterprise Sharp Focus and New Media, one of the largest bilateral trade magazine publishing house.