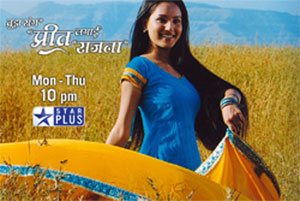 Star Plus' Tuj Sang Preet Lagaayi Sajna of Balaji Telefilms has been facing flak of late due to its low numbers, but if sources are to be believed, there is a high chance of the show going off air in April.

"Recently, Tuj Sang was tossed from its 10 PM prime time slot to the afternoon band, and will be aired from March 16th at the 1 PM slot, replacing Kumkum. But this might only be a temporary phase, as the channel has now taken a final call to end the show", quips our source.

As reported by Telly Buzz earlier, Tuj Sang had received two prior warnings from the channel to deliver, but nothing worked right for the unit.

Lead actor Pooja Bose accepted that she has heard of the news of the show going off air, but said, "I have not got a confirmation from either the channel or the production house".

However, when we called Keertan Adhyantaya, GM and EVP, Star Plus for a confirmation on the same he said, "The show has been shifted to the afternoon slot, and till now we have not decided anything about the termination of the show".

We messaged Ekta Kapoor asking the same, but she replied with a text message that read, "Tuj Sang is moving to an afternoon slot, but its not ending".

However an actor on terms of anonymity confirmed to us that , "The show will be going off air on April 10th, and this is the news we have got".

It looks as though Ekta Kapoor is going thro' a very critical phase, as the Queen of Soaps who once had lot many shows in her kitty on Star Plus will now be left with just Kis Desh to deal with if this news comes true..

For now, it looks like viewers will get to see Tuj Sang at the 1 PM slot for the next few weeks..

+ 2
13 years ago I hope it doesnt goes off air its doing sooo wellll now.. wht does these viewers want more? I think this is the bestest show uptil now...

13 years ago Himanivineet: I guess i shouldn''t..
Anti bidaai fans felt bad when i said smthn bad about their serial...they don''t even realize that we get hurt by their bad comments about bidaai all the time! Anything happens on their serials is always bidaai''s fault...how does that even make sense? Anyways, regarding this article, i actually felt bad for TSPLS fans. Hope the off-air thing is not confirmed!

13 years ago To all BT & TSPLS fans,
first of all, i didn''t mean to hurt anyone. N sry if i did. I''m not even saying Tujh sang is a bad serial, i actually think it''s better than other BT serials currently. The story''s not even finished n it''s surprising that it''s rumored to end.
I''m just saying what i think just like the same ways u guys did. Seriously, u guys don''t even have to read it. I wouldn''t even say anything if u guys bash SP instead of serials of SP.
rania0 I''m not even fighting n not even interested in fighting. I''ve nothing against u or anyone.
Even i used to watch BT serials fan n all but that doesn''t mean i bash other serials just coz it''s going off-air. And plus I just wrote about wat i think of BT serials coz i was a fan too...it''s just like criticizing on ur fave idol. If it was too harsh to read, then fine, don''t read it.
Just like u guys r hurt bcoz i bashed ur serials, the same way other ppl r hurt coz u guys bashed their fave serials.
I''d just like to end this whole fighting going on just bcuz of this one article which may not even be true.
I''d just like to say the same thing u guys did, RESPECT THE FANBASE!

+ 3
13 years ago @[email protected] see u felt bad naa when she said bad abt Harshad see there is other lot of fans of kinshul..they can feel bad too...woh bhi to humans hai..

13 years ago i did,nt ask abt the story line of kdmhmd or kasturi or tpls i asked the story line of bidaiii.seems to b u really like kdmhmd very welll aware abt the story
ROFL.yar plz i don,t want fi8 na.
i am just saying one thing bidaiii has no storyline and also they r not serving any public welfare message to NRI,S.U think bidaiii is totally flawless na.then tell me one thing as u guys say tht bidaiii is famous only for its differnt storyline just telll me how it is different .its not abt quarreling only just gve me one valid point how it is differnt frm BT sops just one.they does,nt have typical sass or they does,nt have typical vamps.
and the bigget blooper in the show is one beautiful normal gal is married to insane abnormal guy''how close to reality na?very much real story
i don,t want to fi8 plz.and also u said in BT SOPAS guys cry it,s look very much unattractive.atleast they show differnt expressions and acting skills unlike ranbir i must say ranbir is ever smiling chahay pahar toot paray''.whr its has benn written guys can,t cry they r made of hard rock or metal tht they shld,nt cry.and as far yrkkh is concerned i like it not only bcz actors are gud looking i like it bcz actors put the life in to the characters like BT soaps actors ,they put the life into the charcter.not like bidaii lead actors same expressions always i think they r just like robot,s

13 years ago Guys, please respect the fan base for any serials...I think the follower of TSPLS are hurt, and by arguing here you are hurting them more.....

13 years ago rania0 that''s funny...old crappy story of bidaai...n u find tspls or kdmhmd sooo different? isn''t tspls a copy of saudhagar if bidaai is based on vivah.
i would say many ppl r interested in ur so called kali/gori story...thats why bidaai has fans n good ratings! You think the whole kali/gori happens in
old times, then y do I still see it happening in modern times. There are still many backward ppl in india differentiating goris & kalis. Just bcuz u haven''t seen it happen, don''t say that it doesn''t happen. It definitely does! That''s basically the moral of the show: not to judge on looks! The story goes around it!
You find kdmhmd better or any other BT serials nowadays? Tell me what message do they present? It''s the usual girl/guy falling in love (or love triangles) and then breaking off and marrying someone else or someone dies and comes back alive/plastic surgery (it''s so easy to present on screen...how do they even pay for it? it costs a lot!) or even memory loss. The lead actress holding a gun shooting their huge enemy (do they even have license to keep weapons? Soha ali khan was cased for keeping weapons so how come nothing happens in serial?) or sometimes their own kids or family. Illegitimate child. Some becoming detectives and finding secrets and all! Everlasting love stories don''t happen in real life! some even get bailed easily after going to jail...pls for sanjay dutt''s case, it took years to be free his case! so i don''t understand how in BT serials, everything is so easy even if it''s the cases of murder? Even the marriages happens more than 1 time...isn''t that illegal?...u call this a story? I don''t even know what they''re trying to present? Just think of those ppl (foreigners or NRIs who''ve never been to India!) think of India''s image after watching the serial? Some might think these stuffs happen often! It''s disgusting! I think kdmhmd deserves to go off-air than t...