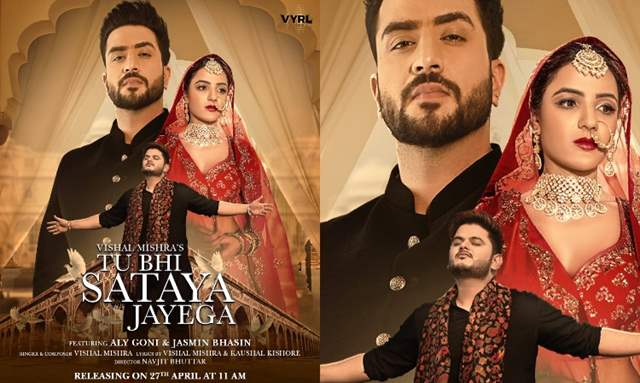 Bigg Boss 14 duo Jasmin Bhasin and Aly Goni have constantly been in the news and fans definitely can't seem to get enough of it. The two had an extremely fulfiling journey on the show and while the two entered as friends, they made their exit with a realisaiton of all the love they have for each other in their hearts. In no time, the two were seen everywhere together.

Post the show, they featured in a music video together, a first for them, titled Tera Suit. The video did really well and while JasLy continues to be loved, they have another music video coming up soon. Both Jasmin and Aly shared the poster of upcoming music video Tu Bhi Sataya Jayega on social media and it is all set to release on April 27, 2021. Sung by Vishal Mishra, the poster sure raises a lot of questions around the topic of the music video, probably a heartbreaking tale of love.

Meanwhile, Jasmin also did a Punjabi music video titled Pani Di Gal and it did extremely well with the fans. There have been constant reports about the duo having signed up not one but five music videos together and that is also something that keeps the fans excited.

Among other updates, Jasmin is currently with Aly and the two keep sharing photos and videos with each other regularly. It was only recently that Aly also spoke about how he is glad to have Jasmin around him during Ramzan and also revealed that he has now decided that he will be marrying Jasmin only.