Toh Baat Pakki is the story of Rajeshwari (Tabu) who is hell bent and reckless on finding the perfect match for her little sister Nisha (Uvika Choudhary). She will march her way to victory never minding that her footsteps are trampling lots of flowers. 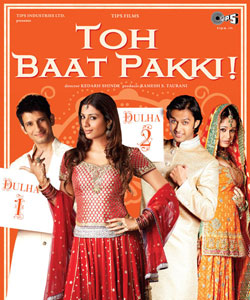 
This search of Rajeshwari for Nisha's marital bliss makes her climb the peak of both madness and meanness. She carefully plans Rahul (Sharman Joshi), an eligible bachelor to fall in love with Nisha and then agree for marriage too. Later when a better bachelor - Yuvraaj (Vatsal Sheth) comes along Rajeshwari smoothly gets Rahul off the hook to catch the bigger fish.

This is when things start getting tricky. How Rahul then makes a master - plan to get Nisha back without Rajeshwari ever getting the hint of it and without hurting Yuvraaj forms the rest of the story.

This is supposed to be a hilarious laugh riot but sorry, just didn't come across as funny except for a scene here and sequence there.

The film has captured Ooty in a scintillating way. Nice to see the charm of this quaint little hill station being explored, albeit very superficially.

Sharman's acting is nice. In fact he is the only one who ends up making you laugh in the film. Tabu as drama queen is good.

The film hints at the bliss of family life, which is something every individual should always remember. It shows how messy things can get when so called loved ones and well wishers get too involved in the match making process.

Music is average and is one of the saving graces of the film.

Where is the grandeur of 70 mm gone? I felt like I'm watching some television soap. Everything from the sets to the costumes, make-up, jewelry, in fact the whole wedding scenario looked like it belonged to a daily show.

Some of the Hindi dialogues are very non-contemporary.

The film is slow paced. Not in an enjoyable way but in an impatient way.

The situations seem abrupt and disconnected. They truly have the power to make you exasperated! Huh!

The scenarios are easily predictable and the unpredictable ones are annoying.

Tabu's costumes didn't get measurements for neck right and it's embarrassing.

The film's chaotic, you know, and not even the likeable chaos that's so typical of weddings. Just plain get-you-to-go- crazy chaos.

And why does everyone wait for their cue to deliver their dialogue here? Excuse me but is it a film or theatre?

Just go if you really have nothing else, like absolutely no other option. Or else save yourself the trouble.