Tellybuzz caught up with the actor where he conversed with us the changes in the television and Bollywood industry today. 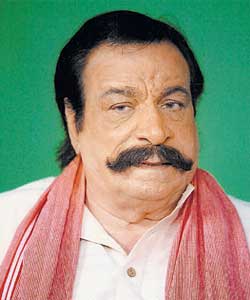 What was the reason for your comeback in television with this show?
Frankly speaking, I didn't want to come back into this profession but I used to get lot of messages, emails SMS and letters from people saying that they miss me a lot.

Humor has changed a lot from your days, how would you like to comment?
Indeed humor has changed but nobody can run away from this trend.  There is a mix of a little vulgarity in the humor through which they are trying to make people laugh and it increases as every joke is cracked one after the other and when everyone is trying to move one step ahead.

You were Pioneer in writing humor; do you regret by seeing this trend which we can't watch with family?
I do but the situation is helpless in this regard and also the family norms have also changed.

You have been a veteran writer for movies; how would you like to comment on the scripts of television?
There has been a standard method that is going on in television and that method and technique have been taken by each and everyone. For example if one person dies in the show and if there are sixteen people around, the time is completely taken on showing those sixteen expressions for which the news took only a second of time while saying. And immediately after that commercial starts after which the episode also ends. But we cannot do anything on that because profit comes this way. Earlier during our days, money was not that much important, but today only money matters and also we had written a song on that 'Paisa Bolta Hai'.

What was the reason for a comeback with this show?
I was approached by Sahara One and I had a special bonding with this channel because the channel has helped a lot of people. I always worked with those people who have always helped and thought about the betterment of others and their Urdu channel of Sahara is really very popular.

Today in the race of channels for TRPs and so much competition, haven't you ever thought of coming back with popular channel?
If I worry about TRPs, I won't survive.

Do you think Bollywood has forgotten their legends?
Yes I do, but its Bollywood trend where as they move one step ahead, they never turn back. We all know that it is Dilip who taught Bollywood dialogues and how to laugh, but nobody remembers him today and never take his name too. There are many such actors like Motilal, Raj Kapoor etc. The worst part of Bollywood is that it doesn't have a history to celebrate a day or so or to give knowledge to people.

Message to your fans?
Be original and don't try to copy others.

Lastly tell us will the audience enjoy your dialogues in the show?
We will try to do everything slowly and nowadays writing is taken over by everybody and the directors also do writing now a days. I have a small life and how much will I do in it, but will definitely try.

StrangernMoscow 9 years ago Kader sir is very right in all that he said. Family norms have changed. Taste's have changed...but good laughter has not been outdated EVER! I hope his comeback will be just as great as the rest of his career! &lt;3

+ 2
10 years ago he is really so damn talented...i enjoyed his comic seasons

10 years ago Kader Khan we do miss you and your slapstick comedy...all said and done..indeed paisa bolta hain...what else made u go to dubai to start the institute when u could have done in India for those who cannot afford it and also comeon you telling there is vulgarity in comedy...do u mean to say the comedy that you and shakti kapoor indulged in what neat and clean..it was downright vulgar too...pls. do act in movies with Govinda..ur team rocked...

sid-cool 10 years ago lovely article thanks for sharing it.
n i totel agree with him.
he is great man.

10 years ago Kader saab is right today it is all about money no concept in the television channels who are only into Saas and Bahu dramas even romantic serials are repulsive. I like his serial Hay padosi after TMKOC its my favourtie