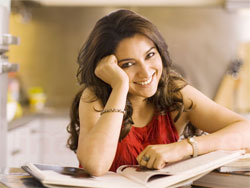 Tisca wins ‘People’s Choice’ award for ‘TZP’ performance! Popular actress and model Tisca Chopra has received rave reviews for her performance in ‘Taare Zameen Par’, so much so that she has not only wowed the biggies of the film business like Raju Hirani and Karan Johar, and also got offers to teach at the Whistling Woods International.

Tisca has been nominated in most of the film awards announced so far! In fact, at a recently held film award function she won the ‘Peoples Choice’ award with an overwhelmingly large majority, with the likes of major stars like Rani Mukherjee, Konkona Sen Sharma, Vidya Balan and Lara Dutta in the running!