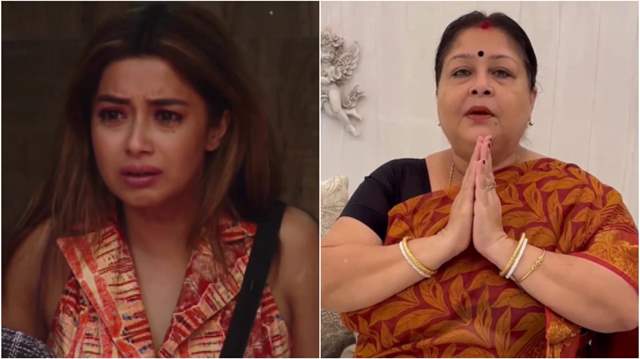 Actress Tina Datta entered the sixteenth edition of Colors’ Bigg Boss after she was approached for a couple of old seasons in the past. Since her entry, Datta has been making noise everywhere. Be it her style statement, chic fashion, one liners, bold arguments or strong stands; Tina has been a talk inside as well as outside the house.

Yesterday an incident happened in the show where on medical appeal Sumbul Toqueer Khan’s father got a chance to speak to Sumbul. Where he broke the BB rules and gave Sumbul house information. He spoke demeaning against Tina and Shalin. Even abused Datta on national television. This vile behavior and the fact that Sumbul’s father got a second opportunity to talk to her has upset the audience as well as Tina’s mother.

Tina’s mom got emotional and teary seeing her daughter being abused and demeaned on national television. Since she didn’t get an opportunity to go and express her views on TV, she has released a video on Tina’s social media, appealing to the audience if it was right for someone to abuse and demean her daughter on a national platform? A crying mother went on to ask if giving such an advice of showing someone their ‘aukat’ is a parent’s duty?

Take a look at what she has to say here…

As they say, never burn someone’s house to build their own! What are your views on this? Let us know in the comments below.

Malkeet Singh talwar 2 months ago It seems big boss too is obsessed with sumbulSumbul's dad seems to be a man of unsound mindClearly shows his up ringingIt is outright disgusting to hear a father talk bullshit about somebody the age of her daughterThis man is being undue importance and I think Sumbul should be chucked out of BB. She is all the time crying playing a victim who is absolutely directionless and her father i am sure has never been to any school or lived amongst civilised peopleHe has no problems sending her daughter to BB because that fills his pockets .He is a shameless man

Shaanaladka 2 months ago Big Boss is at fault. They had gone wrong the first time by bringing Sumbul's dad on the show, showing their bias. They repeated this again knowing that Sumbul's dad was faking his illness. They should have done due diligence on his health by checking medical reports before allowing him to speak to Sumbul. They should have punished Sumbul for her dad's mistake by nominating her every week for this mistake on her dad's part. Salman khan also has been giving undue importance to Sumbul and her attraction towards Shalin but the same is not the case with candidates like Soundarya, Tina or Priyanka? Salman should stop moral policing, all are adults in the show. Please dont give unnecessary importance to Sumbul and Shalin by targeting her infatuation every week.

+ 7
2 months ago Irrespective of how Tina Datta is inside the house, Sumbul's father has no right to use that language for someone else's daughter. What was he thinking sending his 18-year-old daughter to that madhouse? oh right, had to feed off the money, right? Sumbul's father is a vile man! PERIOD!!! I refuse to believe that he has any care for the trauma his daughter is being subjected to.

+ 2
2 months ago Her daughter is already Naagin 7! As clingy as Sumbul is she never talks about Tina the way Tina talks about her. We all know she doesn’t love anybody but herself, but she hugs Shalin and proclaims she’s the only one who knows him or can control him. All of this she does in front of Sumbul because she’s crushing on Shalin! Naagin I tell you!!!