View Profile
With the success of Murder 2 still triumphing the charts, the Bhatt Brothers have decided to go ahead and announce their line-up of the next three films in their pipeline: Blood 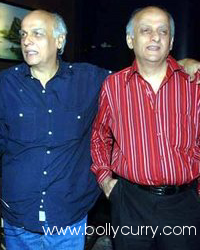 Money, Jannat 2, and Raaz 3. However, the excitement of their planned release dates have now somewhat diminished.
The film Blood Money, starring Kunal Khemu and Amrita Puri was slated to release on Valentines Day weekend. However, due to Karan Johar's Ek Main Aur Ek Tu, starring Imran Khan and Kareena Kapoor, announced to be releasing the same weekend, plans had to be hastily changed. Oh dear!
While there's that excuse, Jannat 2's release date has been postponed because the filmmakers aren't taking IPL opening week lightly. Along with that, Raaz 3 is said to be shot in 3D, so the camp has requested more time for the film, increasing a better chance for the audience to watch the film.
However, the brothers have no wasted any time in announcing the new release dates. Blood Money will now be releasing on March 23rd, Jannat 2 on April 27th, and Raaz 3 on August 31st.
Trying to reduce all competition for their films, the Bhatt brothers believe that it is better to wait for their projects to release rather than just letting them go out on the scheduled day and be lost in the market. In an admirable move, they have also admitted to not believing in hiding their admittance to competition.
Seems like a clever strategy move. Here's wishing the Bhatt Brothers all the best and some fiercer competition!