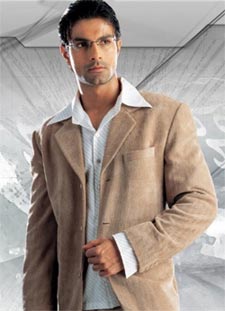 The young and dashing Ashmit Patel, is back in the spotlight with three news releases in March. The actor who got immensely popular after the success of 'Murder' has had a rough patch for quite a long time. Eager to draw first blood with a hit, Ashmit Patel believes that there's no mantra to success in Bollywood.

Q. In the month of March three of your movies, Toss, Kabhi Kahin and The Flag are due to be released. Can we say you are all ready to bounce back in Bollywood?

A. All of the three films were due to be released since a long time, but some or the other problems came across. Well, you can say that I am bouncing back in Bollywood as for a long time, I wasn't seen on celluloid.

Q. How would you differentiate your characters played in these movies?

A. Flag, a period film is based on the 1942 era in which I play a villager called Dev. Kabhi Kahie is about two guys wherein I play a wealthy young boy, not happy with the business he is doing. This movie is basically a journey of two friends, whereas in Toss, I will be seen playing the character of a marketing executive in an ad agency, who takes all the important decisions.

Q. How is your working equation with your co-stars?

A. It was great working with all the three co-stars in the films. Madhurima in Toss and Sheetal Shah in The Flag are freshers, and have got a great future ahead. Tulip will be seen against me in Kabhi Kahi. Again, she is a very talented actress. We two share a great rapport with each other.

Q. Do you feel nervous or excited prior to the day your film is about to release?

A. You can say both. I never hold lot of expectations. Expectations mostly lead to disappointments.

Q. Any interesting incident that you can re-call happening on the sets?

A. We were shooting in Bhuj for The Flag in which there was a scene to be shot in the lake. We started our shoot, but soon we all were shocked to find a crocodile in the lake, after which the scene was called off, and we shot the same scene in Mumbai, away from any lake.

Q. What were you doing all these days?

A. I was shooting all the time for these films. I like to travel and fortunately my work helps. Also whenever I get some time from my work, I enjoy hiking and try other adventures sports.

Q. You assisted director Vikram Bhatt in Awara Pagal Deewana…Any plans of getting into direction…

A. No. I don't think direction is my ball game. Yeah, maybe in the future, you can see me getting into the shoes of a producer.

Q. What according to you is a mantra to success in Bollywood?

A. There is no mantra as such for success. Sometimes even a good script with a good director and big stars falls flat at the box office.

Q. After achieving business degree from Texas, you had planned to work in a corporate set-up. What made you to change your mind and choose acting as your career?

A. I at first joined my family business before working in a corporate sector. But frankly, I didn't enjoy it. Then of course, I was exposed to the world of Bollywood and decided to try my luck in it.

Q. Which are the other projects you are working on?

A. At present, I am busy with dubbing and post production of my upcoming films. There isn't any other project in my hand yet.

Q. Many stars have started working in small screen. Can we expect to see you too on television?

A. No, I don't plan any such thing. As I said, I love traveling, so if I get to do a travel show or something, I may consider doing it.
Featured Video