View Profile
With the nominations announced for this years AXN Action Awards, viewers can get ready to start casting their all important votes. With the who's who of Bollywood making it to the prestigious nomination list, the stage is set for a spirited race for the coveted Action Awards Trophy. 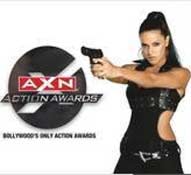 Featured Video
AXN Action Awards has nominated actors for their stellar performances across various action genres. The Best Actor category features action packed performances from favourites like Akshay Kumar, Hrithik Roshan and Aamir Khan. In the Best Actor in a Negative Role, Imran Khan, Saif Ali Khan and Kay Kay Menon battle it out for the top spot. Nominated in the Best Director category are Murgadoss for Ghajini, Ashutosh Gowariker for Jodha Akbar and Abbas Mustan for Race. These 3 movies are up against each other in the Best Action Film category.


Speaking on their nominations in the Best Actor category, Akshay Kumar nominated for Tashan said, "I am really proud to be nominated for the 'Best Action Actor' for my role in Tashan. I have always been passionate about action as a genre and am happy that AXN Action Awards honour excellence in the field. The action in Tashan has a very edgy and stylish feel to it. The action is also unconventional as I play a very rustic character and am happy to see AXN recognizes the different tones that make up the action genre."


On his nomination for Jodha Akbar, Hrithik Roshan said, "There was a phenomenal amount of training involved in making Jodha Akbar a success. It is great to see the hard work pay off with my nomination at the AXN Action Awards. The magnitude of the battles and the action scenes gave the movie a legendary and historic feel. While the action was not the conventional kind, it is good to see the majestic and noble nature of the action sequesnces appreciated by AXN."


While Ghajini star, Aamir Khan said, "Ghajini is a film that required a lot of aggression that exposes the basic crude emotion of human loss. I am honoured to be nominated by AXN in the 'Best Action Actor' category, as the action in Ghajini is more complex and thought provoking, showcasing anger, vengeance and physical violence. I am pleased that AXN Action Awards recognizes the multifaceted action displayed in Ghajini."


On his nomination for Best Actor in a Negative Role, Imran Khan said, "Kidnap gave me a great opportunity to showcase a different persona. It required an intense and meticulous performance and I am excited to be nominated by AXN Action Awards for my negative portrayal of the character. I think that AXN Action Awards is a great platform that recognizes the role of action in Indian cinema."


Race star, Saif Ali Khan said, "Race is a thorough bred action film, complete with flamboyance and panache. I enjoyed performing the stunts and watching the movie evolve into a suave piece of cinema. I am thrilled to be nominated for an AXN Action Award for my role in Race, as it gave me great satisfaction to be a part of such thrilling action."


Kay Kay Menon, nominated for Drona said, "Drona was a bold movie that ventured into a new genre of films. I am proud to see my performance nominated for an AXN Action Award, as the character was completely different to anything I have played before. The film demanded a lot of practice for the stunts and regular training for the sword fighting sequences. It is great to see action grow as a credible genre in Indian films and am pleased that AXN is paying tribute to deserving performances."


With voting open to the public, AXN Action Awards encourages viewer participation by letting the fans decide who should win the coveted title.