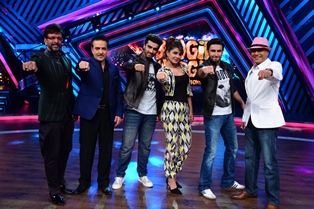 Sony TV's popular dance reality show Boogie Woogie kids Championship has always entertained its audience and this time too the show welcomed its guests Ranveer, Arjun and Priyanka who made an appearance to promote their upcoming venture Gunday.

"This has been the most entertaining episode in 16 years", claimed judges Javed Jaffrey, Ravi Behl and Naved Jaffrey when the star cast of Gunday took the entertainment level on Boogie Woogie Kids Championship to newer heights. The trio danced, mimicked and took a dig at each other leaving the audiences asking for more. Right from the beginning, the trio kept everyone on their feet with their hilarious antics. While Ranveer Singh teased Priyanka Chopra by saying, "Bachhi ne tujhse acha perform kiya hai", when Bebechana performed her number Ram chahe leela'; Arjun Kapoor pulled Ranveer's leg by saying, "Beta tu badi cheez hai jisne Ranveer ki bolti band kardi" when Preetjyot asked him questions about his hairdo.

The trio even showed off some dance moves. Ranveer grooved with Preetjyot on Ainwayi ainwayi' while Arjun showed off his signature moves on the song Hua chokra jawan re' with Aryan Patra. All three set the stage on fire when the song Tune maari entriyaan' resonated on the sets and shook a leg with Mumtaaz.

This is not all! In a competition that all Priyanka fans would die for, the talented beauty challenged Ranveer and Arjun for a competition to twirl the ball like contestant Abhishek Sinha. The winner had the golden chance of winning a kiss from the lady herself. But to their misfortune none could beat Abhishek and the young one soon got a peck on his cheek from Priyanka Chopra.

"This is something I don't want to talk about": Priyanka Chopra has a ...