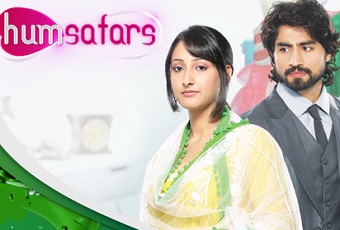 The show is based on Sahir (Harshad Chopra) who is arrogant and strict owns a fashion house company and docile Arzoo Nausheen Khan (Shivya Pathania) who is a fashion designer by profession, works in his company.

The show will depict the tale of Sahir and Arzoo's love story and is based in Lucknow city. Being set in Nawaabi city, thus these actors visited many famous spots to explore the city more.

Harshad and Shivya first visited to a well known institute of Fashion and Technology as a chief guests and there they distributed prizes to the winners. There actors gave tips to the students about designing and how to achieve success in this field.

Later actors visited famous eatery places in Lucknow known as 'Tundey Kebab' to taste the best Kebabs of Lucknow. They also visited to another famous eatery named as 'Royal Cafe'. Shivya went to buy chicken dress material in a famous boutique as they are quite famous in Lucknow.

TellyBuzz wishes entire cast of Humsafars all the best!

blusky165 6 years ago Eagerly waiting for Hamsafars. all the best Harshad Chopra

sophiam 6 years ago Excited about Humsafars...
All the best Harshad Chopra..
Waiting for monday..

mansid 6 years ago Harshad Chopra you are wonderful actor...
Show is going to be superb...

Archaana 6 years ago Harshad Chopra,
So excited to see you back...