View Profile
Rashmi Sharma's Sunrise Productions has given the viewers shows like Raja Ki Aayegi Baraat on Star Plus and Kuch Safar Aisa..Kabhi Socha Na Tha on Sony. The producer has now come up with a brand new show Rehna Hai Teri Palkon Ki Chaaon Mein for NDTV Imagine, which is a heart- warming tale of an orphan girl Suman, whose dreams of finding family and love come true when she is accepted by a very lovable and traditional joint family.

Telly Buzz in an exclusive conversation with the Producer, Rashmi Sharma on her new show and much more.. 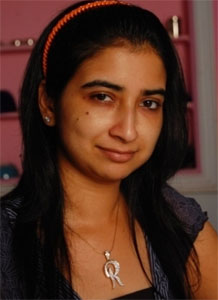 Featured Video
How has your journey been as a Producer?
Amazing. It has also been hectic. Being a female in a male dominated profession, it is somewhat difficult. But I do enjoy my time.

You are now producing your third show on television. So what has the industry taught you so far?
Nothing. The thing that I as an individual picked up was show-making. My creative thinking also got developed due to my field days. The diploma that I had done from IFDA came in handy but otherwise it's all up to you in this industry.

How different is Palkon Ki Chaaon Mein from your other two shows?
I have always seen to it that I create a show with a new concept in mind. Raja Ki Aayegi Baraat was totally different from Kuch Safar. Similarly this also is very unique and has its own individual identity. It shows an ideal family and what kinds of emotions arise, when an orphan girl is introduced to this family.

What is the inspiration behind Palkon?
The vanishing rituals and customs of our country and an effort to keep them alive is my inspiration for the show. There are many formalities before weddings that we urban people completely overlook but its still carried out in the villages of Madhya Pradesh and Uttar Pradesh. These are the things that I want to highlight- that we are losing flavor of our tradition slowly.

Tell us about the cast of the show?
Since our show is based in Madhya Pradesh we made sure that 50% of the cast members are from there. We wanted to give an authentic feel to the show. There is some quality in each of the cast members that make them apt for their role.

Why did you choose to take newcomers for male leads in the show?
Newcomers have very fresh minds that can be molded very easily. Also audiences don't attach them to any prior roles, so this helps for an added impact of the present character.

Tell us about your experience shooting in Indore?
It was a mind-blowing experience. We had the chance to explore a lot of unknown places. Indore's educational institutes are awesome. Everyone should visit it atleast once in their lives. Indore is truly a beautiful city!

Was it difficult to manage such a huge cast, that too at a different place?
It wasn't exactly difficult. You can say it was a heady experience.

What's the reason for Raja Ki Aayegi Baraat on Star Plus to be shifted to the afternoon slot?
See that's the prerogative of the channel. So you should ask this question to the channel authorities. Nonetheless, we have taken the change in a very positive manner. We were the number one show in primetime and we will prove to be the number one show in the afternoon slot too.

Is it true that the director of Palkon was mistaken for a wanted person and fell into trouble at Indore?
(Silence for a few seconds). Nope. It's not all true. The whole shoot went ahead very peacefully. We even shot at the railway junction of Indore. There was no harassment, neither from the media nor from the public.

12 years ago u truly learned nothing thats why u butchered a perfectly good story in pkcm. The ending was pathetic. If you NEVER EVER make another drama it would be too soon.

karan1987 12 years ago i think that the director has lost his/her mind because of the current situation in the show "Palkon Ki Chhaon Mein" Karan IS SUMAN'S TRUE LOVE. u cant just seperate them!!! its so weird when Karan calls his first love "Bhabhi"

12 years ago Yes, truely the indsutry has taught you nothing. Which is why you have no idea of how to keep a good idea going!

snowghost.white 12 years ago what ever but i want to say ki karthik aur nandini ki shaadi was the worst........from last six months rone dhone ke aalwa serial mein kuch nahi hua and this was the worst among all.......

12 years ago I am ashamed to call myself a pkcmfan. It seems u dont want to learn anything from the industry or respect the feelings of u r viewers. Same as RKAB PKCM is proceedign towards the drain. If u dont know how to make serials dont make or learn from experienced persons like ekta kapoor instead of wasting time of the viewers.

13 years ago She's acting like a school kid, who doesnt understand what the teacher is saying.
I mean RKAB was not rubbish, but it wasnt what you call entertainment.

+ 5
13 years ago @Beena Di
Yea, i also noticed that Cameos are more concentrated than the Leads, i had to quit RKAB when those two Bua entered, that was so fake ! I believe there is black magic but witch coming, bla bla and bla is stupid nah !

I Gave up on it,I really gotten fed up with that Track,As i follow UK Episodes, i don't wat is going to happend now, someone called Imli or nimli entered i think !

Well you guyz said most of it, so i don't want to continue writing negatives for this woman !

+ 3
13 years ago Ms. Sharma...you need reality check! After what you did to RKAB, I have no faith in u or ur team....As a woman you shd have more senstivity to show character growth in RKAB. But alas, you spoilt everything that was once beautiful in RKAB, made mockery of a beautiful Yura bond that we loved to see. 2nd marriage track is so pathetic, I don't have words for it anymore. So much feedback from so many loyal fans to writer, actors and yet u did nothing. It just shows how much u care. No proper scenes, no proper dialogues, no logical sequence, no proper family bond, no growth in man-woman relationship.... everything is so unrealistic and crappy. I hope SP closes the show , so that whatever little respect we hv left for the actors (not characters) remains..... If you cared, you wud have listened to the loyal viwers and shown something sensible. I loved this show to the core, it was the only show I watched and u n ur team destroyed it all....