View Profile
Kabir Khan and Mini Mathur indeed make an ideal couple. The way they are juggling their careers as well as the responsibility of their two little children- Vivaan and Sairah is quite exemplifying. 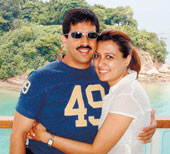 Featured Video
Says our source, "The way they plan their schedules is apt. Kabir who is now basking in the glory of the success of his directorial venture New York, obviously feels this is a good time for Mini to catch up with her career."

Mini is more than happy to get a break from her motherly duties, and is all set to host the adventure based show on Sony, Iss Jungle Se Mujhe Bachao. She says, "This jungle is not for kids; now that the film has released and received a fabulous response, Kabir has promised he will take care of the kids and will be shuttling over the weekends to catch up with me! I definitely will go crazy here for two months!"

Adds our source, "The time that Kabir spends with his kids will make up for what he missed during the shooting of New York. It will give him the well needed family time with Vivaan and Sairah. A pure family man like Kabir will totally love such an opportunity."

The source further tells, "This kind of understanding between Mini and Kabir is what makes them click as a couple."

Well, this just proves that if there are a lot of broken marriages in Bollywood, then this is the good side of this industry!

13 years ago gr8 2 see such understanding between them!

13 years ago NY was a great movie...ans mini is so sweet..she is fabulous as anchor...

+ 2
13 years ago aww...so sweet, i didnt know mini's hubby was no other than kabir khan. she must be so proud of him after new york. best wishes to them and their family. i remember seeing him in JDJ, but so silly to not recognize him. mini is the mom of two kids? wow. no wonder she couldnt host indian idol last season!

rohana.m 13 years ago They are one of the few couples who understand that you need a balance in marriage and in life. I had not known that they were a couple. All the best to the both of them.
=)

And they make such a cute couple!!!!

Seems like thats the secret of their happy marriage!!!!!Hope people take a lesson from them!!!!There is a thing to be learned from them alright!!!!

+ 3
13 years ago very nice to see such an understanding couple now a days.

13 years ago I didn't know Mini Mathur was married !! And that too..to Kabir Khan !!
WHOA !!!
Hahahaha !!
Nyway...they look faboulous together.

+ 3
13 years ago that is very nice to read about, it always this drama and that
glad this couple has a balance of things!