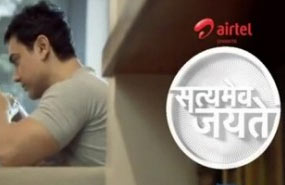 While hitting out at the BJP government in Karnataka, Thackeray lavishly praised Aamir's show which went on air last Sunday and secured thumbs up around the country.

In an editorial in the Sena mouthpiece Saamna Tuesday, Thackeray said that Karnataka's decision on grounds that the show was unacceptable to Kannada film makers showed that parochialism had overtaken patriotism.

"The point is Aamir Khan is not like Shah Rukh Khan or other Khans who found nothing wrong in Pakistan cricketers playing in India," he said.

"(Aamir's) programmes and movies always dwell on patriotism and love for the country. They always inspire the youth.

"This show must not be tied up in parochial chains or barred from the public. This is our view," Thackeray said, urging the Karnataka government to permit its telecast.

He took the opportunity to hit out at Karnataka for its attempts to gag the Marathis in the state even as a long-pending boundary dispute with Maharashtra awaits a solution.

+ 5
8 years ago Thakrey is an idiot-hes talking about Patriotism-he who is against Biharis,and one time even south Indians is trying to preach patriotism..blah!!!get a life..first learn to love your own countrymen before preaching patriotism!

+ 4
8 years ago Funny to see Thackeray, who claims that Mumbai is a property of only Marathis and not the rest of the Indians, talking about patriotism.. What's wrong in Pakistan artistes/players performing in India? And to India-Forums, please check your facts before publishing. SMJ is not banned in Karnataka, its just not being dubbed in its regional language.

+ 4
8 years ago Fisrt this man should learn to place being Indian first than being marathi !!

And better not offend shahrukh khan in any ways...aamir is aamir and shahrukh is shahrukh...we love both !!

+ 2
8 years ago Patriotism coming from people who literally place being a Marathi more importance than being an Indian!!!!

+ 3
8 years ago This whole thing has been blown way out of proportion. The show is not banned in Karnataka; I watched it in Karnataka on Sunday. It is simply not being dubbed into Kannada, the regional language (for various other reasons that are equally silly). There is a huge difference and IF should know better, if it wants to project itself as a legitimate source, than to blindly copy the news of other sources. Check your facts people!

And I refuse to dignify Thackeray with a response! What baseness!

+ 4
8 years ago thackerey its time to change ur mind...for people like u the relationship btwn india n pakistan gets worse...time to wake up :)