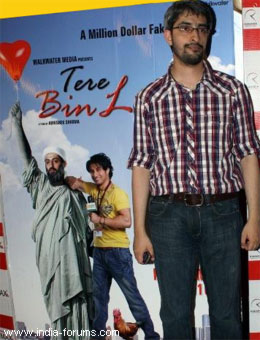 Mumbai, Oct 18 Director Abhishek Sharma, whose comic take on terrorism 'Tere Bin Laden' evoked a tremor of titters, is back -- this time with a graphic novel titled 'Munkeeman' which he intends to turn into a feature film.

The 'Monkey Man' refers to the half-monkey, half-human creature which allegedly attacked and petrified folks in Delhi in 2001. This was also the subject of Rakeysh Omprakash Mehra's film 'Delhi 6'.

Abhishek, who has been underground since the release and success of 'Tere Bin Laden', was apparently writing a sequel which, after the death of Laden, has been shelved.

Explaining why he chose to go from filmmaking to writing a graphic novel, he said: 'I am fascinated by the comic format. I am coming out with a graphic novel entitled 'Munkeeman'. It will be launched in Mumbai Oct 23.'

Speaking on the similarities to 'Delhi 6', Abhishek says: 'In 'Delhi 6', they used this urban legend like a metaphor. This time we are telling his story, his point of view. And most importantly, trying to create India's first dark superhero who is an antagonist for the society.'

Abhishek plans to make 'Munkeeman' into a franchise.

'There will be comics, video games, and definitely a feature film! It is inspired by a true urban legend about a monster who believes he's a superhero. The story is about an absurd creature who wreaked havoc on the rooftops and street corners of Delhi. Nobody ever got a full glimpse of him but the few unlucky who encountered him, described him as half-human and half-ape.

'The police, the media and the gossip-mongers, started to call to him Monkey Man. Now, 10 years later, he is back with a bang! And this time, he wants the world to know his side of the story. His name is Dr. Dheeraj Dhalla or DD, and he is a molecular biologist. He is working on a secret experiment called 'reverse evolution'. He is in love with Sayani, his stepsister! He is a social misfit who wants to be a vigilante. A monster who believes he is a superhero,' Abhishek said.

'He can climb tall structures in seconds, jump from great heights in a flash, and bite off human bones with his powerful jaw. He can lift heavy objects and throw them around. He can tear a man from limb to limb. He can crush hardest of substances with his bare hands. But his biggest power is that he can unintentionally create terror in the heart of the society,' he added.

But Abhishek refused to reveal more about the cast, saying it was too early to divulge details.