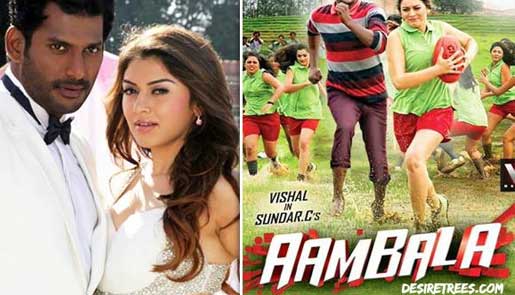 "Aambala", which directly translates to masculine, is like film made by "Singam" fame Hari Gopalakrishnan, who is known for making films with flying objects, say cars and throws in some humans too occasionally.

Maybe Hari was hired to direct the action portion because Vishal as the producer may have felt that nobody else can do justice to his action avatar. So when Vishal makes a grand entry in a scene seated on the bonnet of a car about 30 feet above the ground, you know he's quite right about Hari because he's Tamil cinema's Rohit Shetty when it comes to action, while Sundar is known for churning out some great comedy, the kind audiences in B and C centres will guiltlessly lap up.

Vishal's (who plays Saravanan) political leanings are very evident in "Aambala", at least in the initial few minutes where he impresses a local politician and is subsequently asked if he'd like to enter politics. Saravanan replies, "Why would we take your place, if you do your job well?" Not that it's so important, but this line reminds us of a recent incident between Vishal and a senior actor, who heads a film body. This is Vishal's subtle way of letting everyone know that he's happy being an actor. Otherwise, the film turns out to be a cliched rehash of several family stories with adequate dose of action and nauseating comedy.

A southern filmmaker's idea of a commercial family drama is becoming very formulaic. Most of these stories are about fixing a broken family, reuniting with long separated family members and endorsing inter-familial marriage (in 21st century, really?). Here, three pairs of cousins plan on getting married. And the whole idea of the family reunion in "Aambala" is so dumb.

When three sisters banish their brother from their family, the latter sends his three sons, many years later, to woo the daughters of his sisters. Imagine how simple life would've been if all family tussles were ironed out by making its members marry each other (doesn't matter even if you were to kidnap someone and marry)? This pattern of storytelling was started in the 1980s and it's disappointing to see that it's still being milked dry.

Another problem is the size of these families, which usually feature more members than a cricket team (including non-playing members). Why can't family stories be about, say a family of two or three, like the older couple in Telugu film "Mithunam"? There's no hard and fast rule that it should be about a smaller family but the same applies for stories featuring bigger families as well. In "Aambala", the additional characters in the family may have been included just to give hero Vishal an opportunity to prove he's got more relationships to fix besides his own and his brothers'.

This is the third time Hansika has collaborated with director Sundar, who by now has proved she's got much more to showcase than her acting chops. Santhanam on the other hand, who is still capable of carrying the weight of a film singlehandedly, has started to get extremely nauseating with his funny one-liners that are mostly offensive and racist. Sundar's choice to cast Ramya Krishnan came as a surprise but her role not so much as she plays a toned down version of Neelambari from acePadayappa".

It's still tough to understand why Vishal would do two back-to-back masala entertainers after experimenting with films such as "Pandiya Naadu" and "Naan Sigappu Manithan", which performed well commercially at the ticket window. Maybe he underestimates his own talent and trades it for garbage like "Aambala", which is unarguably the worst product to have come out of Sundar's factory.

If masculinity is all about making Vishal drool at the slip of Hansika's pallu, her back and when she slips her mobile into her blouse (while on a video call), the makers have got everything right. Otherwise, there's nothing masculine about "Aambala".