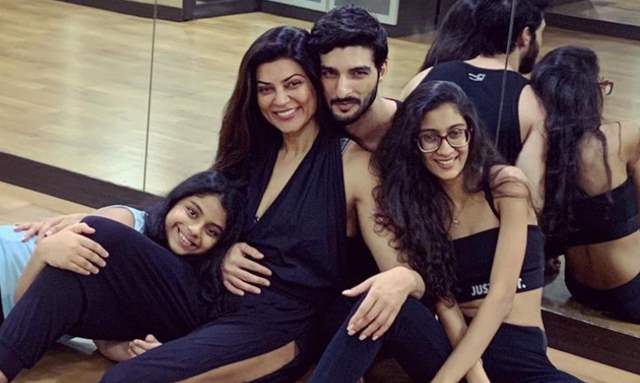 Sushmita Sen is a proud mother of two daughters- Renee and Alisah and she hold a great bond with the two. While her eldest daughter, Renee who made her acting debut on the OTT platform, the young actress spilled the beans about her equation with her mother’s beau Rohman Shawl.

Renee described her family as a ‘unit’ and said that her mom has raised them to be complete in themselves. During her interaction with Hindustan Times, she referred to Rohman as ‘uncle’ and said, “Rohman Uncle is a beautiful presence in our lives, but we’re all very complete people.” She added, “We’re one unit!”

She also maintained that he is someone they can really depend on. Calling him a young, kind, and loving person, she revealed that he can also be strict, which is good for “four of them”.

Sushmita Sen and boyfriend Rohman Shawl have been painting the town red with their love affair. The couple’s social media PDAs have been the talk of the town for quite some time now and the duo has been taking their relationship slowly.

Renee further spoke about her time with Rohman and revealed that the family usually meet and have fun on Sundays and love watching movies with their mother while she introduces world cinema to Alisah.

“We’re learning about him (Rohman) too; his culture, his family. We could be doing nothing and having the most amazing time,” said Renee in her interview with Hindustan Times.

For the unversed, Renee will be seen making her acting debut in a short film called Suttabaazi, which releases this January.

Sushmita Sen’s daughter Renee reveals why she chose to not know her ...

Sushmita Sen’s Boyfriend Rohman Shawl gets Her Name Tattooed on his ...