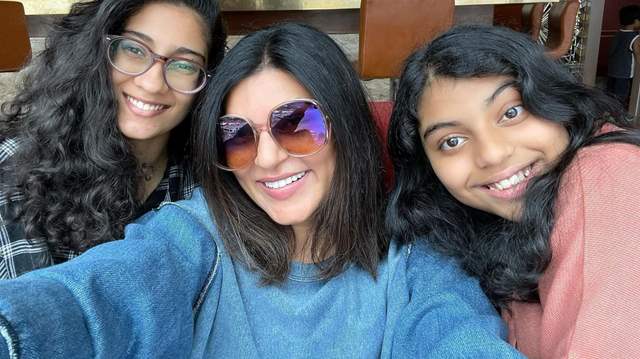 After Lalit Modi shared a series of intimate pictures with actress Sushmita Sen on his Instagram handle, the social media had gone into a state of disbelief. Sharing the pictures Lalit also termed Sen as his better half which sparked discussions amongst everyone.

However, minutes after his revelatory tweet went viral, he took to his Twitter handle to clarify that he is not yet married to his 'better half'. "Just for clarity. Not married - just dating each other. That too it will happen one day," tweeted Modi.

Now, after Lalit Sushmita has finally opened up on the whole situation. The actress has taken to her social media handle and shared an adorable picture with her daughters. Sharing the picture she also penned a subtly slamming note for her followers that read, "I am in a happy place!!! NOT MARRIED…NO RINGS…Unconditionally surrounded by love!! Enough clarification given…now back to life & work!! Thank you for sharing in my happiness always…and for those who don’t…it’s #NOYB Anyway!! I love you guys!!!"

For the unversed, Sushmita Sen and her Kashmiri partner Rohman Shawl were in a happy space until May 2022. Post that, the couple parted ways but on cordial note. In a recent interaction, Sushmita had talked about why she isn't married until no and how she always got with men who had some or the other issues and weren't in the right space.

To be noted, Sushmita's ex boyfriend Rohman Shawl also expressed himself in regards to Sushmita and Lalit's reaction. Talking to Pinkvilla he quoted, ""Let’s be happy for them na. Love is beautiful. All I know is if she has chosen someone, he is worth it!"

Talking about Lalit Modi, he got married to Minal Modi in October 1999. Lalit and Minal were blessed with two kids, a daughter, Aliya Modi, and a son, Ruchir Modi. Unfortunately, Minal breathed her last in 2018 after battling cancer for a long time.

+ 8
2 months ago every deserve happiness and if they are bringing that to each other's live, who cares?

+ 5
2 months ago That's Great That Old Guy Was A Worst Choice But To Each Their Own.

+ 14
2 months ago “ Unconditionally surrounded by love!!” And the best part is that there is no him in the pic😂