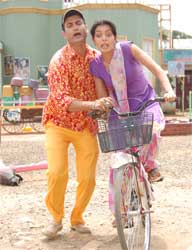 Since, Surili does not have a ladies cycle, Biji quietly sells his and buys a ladies cycle for Surili and watches with pride as Surili begins preparations for the big day. The preparations are on in full swing; the mood all round Laptaganj is like that of 'Jo Jeeta Wohi Sikander'.

Shubhangi Gokhale aka mausi says, "I know that Biji is the best but since I do not approve of him as my son-in law, I do not want him to train Surili. However, we are having fun on the sets. Surili has taken up double- seat cycling and its too much fun. In my spare time on the sets, she takes me around for a ride."

Priti Amin aka Surili adds, "I had a lot of fun cycling on the sets. It was a challenge. It was tough physically. But it took me back to my childhood days. I am also an expert in two-seater cycling now."

Laptaganj is buzzing with excitement and everybody is anxious to know who will be the champion of the competition. Will Biji succeed in teaching Surili how to ride a cycle and get selected? Will Surili be able to take up this challenge or will she give up? Watch all the excitement, fun and camaraderie of residents in upcoming four part series of Lapataganj.
4 Likes

Lina400 11 years ago wow, mona jee i respect u even more today

NKSUDHIR 11 years ago Good job Mona. You don''t need to do item numbers just for get work in movies

Sabah 11 years ago thats good, i am happy with her decision.

Infinitedreams 11 years ago Mona is wonderful actress, and i am so agree with her. She proved herself as Jassi, and i hope she will get offer according to her taste.

jasmeet khaneja 11 years ago she really has guts!!!
But i am really happy she refused doing item numbers.....why should any actress need shed clothes if they are not comfortable.
I respect her choice and values!!

fly2me 11 years ago that''s just the way she rolls...lol
i love her and her personality!

-AMIGAIL-LOVER- 11 years ago the other show that she won was ek khiladi ek hasina or something like that...