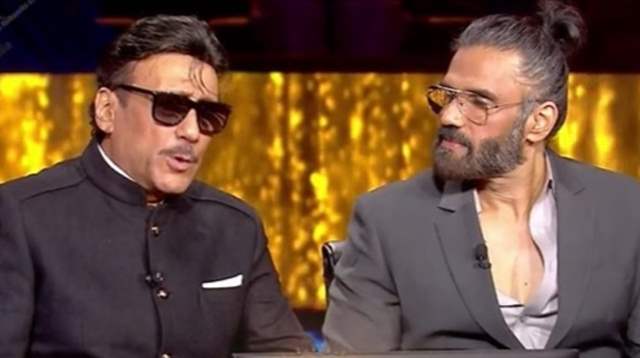 Actors Jackie Shroff and Suniel Shetty joined as guests in the episode 'Fantastic Friday' of season 13 of 'Kaun Banega Crorepati'.

Where both of them first pulled each other's leg about their bonding and then also made interesting revelations about their unmatched friendship.

Let us tell you that Jackie-Sunil have been very good friends for almost 50 years. The unmatched friendship of these two is quite fame in Bollywood.

Suniel told host Amitabh Bachchan how he and other kids used to idolise Jackie, who would hang around outside his store just so it would attract more patrons.

In the video of this show that surfaced, you can see that host Amitabh Bachchan asks Sunil how long have you known Jackie.

On this Sunil says that if I know I have been for 50 years, but my friendship is for 45 years.

After this Jackie reveals how Sunil helped us when my father (Kakubhai Shroff) fell ill during difficult times.

"My father had a bad reaction to penicillin and his skin was peeling off. There were a lot of people in my house and we could not take proper care of him in that small room. Suniel gave us his house and said keep your father there. You were shooting at Miramar back then. I kept my father there for 10-15 days. He (Suniel) did not live there. He vacated the house and told me to go there. So there is a strong bond between us)".

On this, Amitabh also says passionately - In today's era, such friendship is rarely seen.

In a pre-recorded interview, shown during the episode, Suniel also revealed how Jackie Shroff had once shared a ‘beautiful’ thought about how life changes when one finds wealth and success.

He narrates it  recalling Jackie's words,

The actors also revealed about the cause they came to play for while playing.

Suniel Shetty on completing 29 years in Bollywood; "Being labelled as ...

20 days ago This is called true friendships