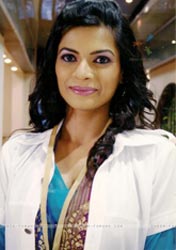 Sunaina Gulia, Dr. Anjali in Star One's Dill Mil Gaye has recently got back from her Brazil trip, and is now waiting for good offers to come her way.

The tall and good-looking actress will be seen in an episode of Sony's CID, produced by Fireworks Productions where she plays the girl friend of Daya (Daya Shetty). The episode will be aired this Friday, 19th March.

According to our source, "Sunaina plays Purbhi, the girl friend of CID officer Daya. Purbhi seeks Daya's help as two of her brothers have got killed under mysterious circumstances. There will be a twist in the tale when Daya gets to know that a CID officer in his team is actually involved in the killing of Purbhi's brothers".

When called, Sunaina confirmed the news and said, "Yes, I will be seen for an episode in CID, where I play the girl friend of Daya. There is a problem that the girl has in her family, and she takes the help of the CID team".

The creative team has no plans of extending the role of Purbhi beyond an episode, but have kept the character open, in case they wish to bring the love life of Daya back to the show.

The episode featuring Sunaina Gulia will be aired on 19th March.

sourabh7 9 years ago I hope Pankit and Sunaina come back to DMG...it is the great...

LOVE_DMG 10 years ago hope she comes bak to dmg and help arman man !

devashri 10 years ago let her go back to lovey dovey dil mil gaye. We don't need her in cid ruining daya's life sorry.

devashri 10 years ago
i hate her.She is too young for daya. He needs someone older and full figured. Not skinny and annoying like her

shinseen 10 years ago mind blasting acting is just ......
her negative and positive attitude in her role of anjali is superb can't express

Alaya F on working during lockdown: Everything now takes 5 ...
39 minutes ago