As we all know, Hats Off Productions' Sukh By Chance on Sony has been contracted only till May. And as reported earlier, there is every chance of the show going off air post this period. 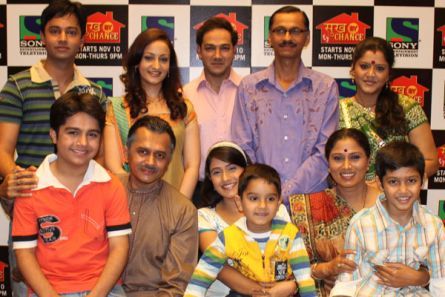 Featured Video
As per the buzz, "The show might now get a change in time slot. There is every possibility of the show getting moved to the time slot of 8 PM".

Our source further tells us, "Sony will air Indian Idol 5 at the 9 PM slot. Hence there is a need for Sukh By Chance to be moved. The final decision on the new slot has not been arrived at, but the channel will take a call in few days' time. Even if we get the slot of 8 PM now, there is every chance that the show will win up on May 26th".

We tried calling J.D. Majethia, but he asked us to call him later.

12 years ago Sony appreciates creativity, but not for long and they have a reason for it. Sony is the only channel amongst zee, colors, and star that has the least saas bahu type shows. It gives us a variety like SBC, indian idol, mahi way, and cid. However, people just don't appreciate creativity. They just want a bahu who is trying to expose somebody or managing her husband (just like bidaai and yeh rishta). Therefore, TRPs go down for sony. Then, can anybody give me one reason why they should not wrap up these shows?

12 years ago @ atifawan10 - totally agree with you. I too want Bhaskar Bharti back on SONY. It was even giving SONY a TRP of more that 3.5. And later becoz SONY shifted it to the new 7:30 slot and asked the CV's of the show to end the track, the whole story had to be changed and that's the reason it became boring. No fault of CV's, only to blame SONY for this coz CV's changed the story coz they were asked to end the show.

12 years ago the story is almost finished but what about Tinaaash their love has just blossomed...

+ 3
12 years ago i hope it dones't end....i really hate how sony is closing all his shows esp. if it closes the yrf ones because those are almost the only good shows left

12 years ago Thank God, finally the show is OVER. I mean it was really so boring...Actually SONY has lost those MAGIC SHOWS which drove away the attention of the audiences. Now, they have only a handful of boring, idiotic shows which they are wrapping every 5-6 months. Still Comedy Circus, Aahat, Mahi Way, Seven and Rishta.Com are far better than other shows on SONY. Bhaskar Bharti was really much better, still don't understand why did they close the show.
The other shows of Hats Off Productions were really good - like Baa, Bahoo Aur Baby and the best comedy show - Khichdi

12 years ago Story has reached its logical end .. and I dont mind the wrap up ..but I wish they had showed more of Tinaash ..